The Town of Babylon is launching a fundraising effort for Ukraine that aims to collect $25,000 through the town’s businesses for refugees fleeing the Russian invasion.

Supervisor Rich Schaffer said the town’s Industrial Development Agency will coordinate the effort by reaching out to IDA clients, local chambers of commerce and the general business community.

"We felt that the monetary collection was the best way to do it," he... END_OF_DOCUMENT_TOKEN_TO_BE_REPLACED

RIVERHEAD, NY — After a dramatic uptick in mental health issues sparked by the pandemic, Suffolk County Sheriff Errol Toulon and elected officials are set to unveil a new facility in Riverhead Thursday aimed at addressing the escalating need — and curbing crime.

The new facility, to be located on East Main Street, will help East End and Long Island residents with mental health concerns and address a gap in mental health services caused... END_OF_DOCUMENT_TOKEN_TO_BE_REPLACED

Helping our Youth Write the Next Pages of Black history 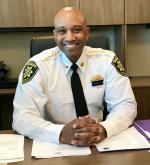 During Black History Month, we stop to consider not only the progress we have made towards equality in this country, but also the ongoing issues facing our Black youth every day.

Historically, young Black males are incarcerated at a higher rate than others. While about 8 percent of the school-age population in Suffolk is African American, Black men currently comprise approximately 41 percent of the inmates under 21 years old in the... END_OF_DOCUMENT_TOKEN_TO_BE_REPLACED

President Joe Biden traveled to New York City this we to discuss ways to deal with the deadly gun violence plaguing the five boroughs and beyond.
And Gov. Kathy Hochul signs off on new congressional maps that give Democrats a heavy political advantage over Republicans. Is this a course correction or gerrymandering at its worst?
Joining News 12’s Rich Barrabi are Suffolk Sheriff Errol Toulon and former state Sen. Jack Martins. END_OF_DOCUMENT_TOKEN_TO_BE_REPLACED

January 2022 is National Slavery and Human Trafficking Prevention Month, which coincides with the Department of Homeland Security’s annual “Blue Campaign” - a national public awareness effort to educate the public to recognize the signs of victims of human trafficking. To raise awareness, the center façade of the Suffolk County Sheriff’s Office Correctional Facility in Riverhead will be lit up in blue light throughout the month of January.... END_OF_DOCUMENT_TOKEN_TO_BE_REPLACED

Anker won by 63 votes after a recount of ballots concluded Monday, according to unofficial results.

She had been down by nearly 1,200 votes on election night but caught up in absentee ballots... END_OF_DOCUMENT_TOKEN_TO_BE_REPLACED

In this Joint Effort, a Fresh START for Suffolk Inmates Begins with the Right Outfit

A new clothing drive is seeking donations to provide inmates leaving the Suffolk County prison system with dress attire so they can pursue career and educational goals.

Robert T. Calarco has emerged as a leader with a solid record since his first election to the seat a decade ago.

Seeking a sixth and final term, Calarco, 42, of Patchogue, says his top district priority is the sewer project to connect 500 homes in south Patchogue. He vows to assist the county's effort to acquire and preserve part of the Avery Homestead in partnership with Brookhaven Town and continue striving to improve housing and... END_OF_DOCUMENT_TOKEN_TO_BE_REPLACED

Among the most crucial local issues for the North Fork is protecting water quality, and Albert J. Krupski Jr. knows that well.

Chronically poor drainage on roads during even moderate storms can lead to flooding and an endangered aquifer, and the solutions are expensive and time-consuming improvements to our drainage systems — the kind of work for which Krupski is well-prepared. The 61-year-old Cutchogue Democrat comes from a... END_OF_DOCUMENT_TOKEN_TO_BE_REPLACED

Bridget M. Fleming, 61, of Noyac, understands the risk that climate change presents to her ocean-adjacent district that stretches from Montauk to East Moriches, along with Shelter Island. That means pushing for ways to reduce Suffolk’s reliance on fossil fuels, including by expanding solar energy, and to mitigate the impact of extreme weather now by building up wetlands to help stem disastrous flooding from rising seas.