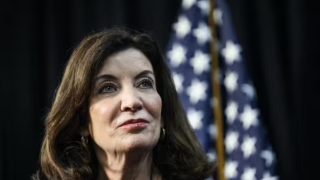 Shortly after Kathy C. Hochul took office 14 months ago, it became clear that New York's first woman governor would have to face multiple state crises in short order. Continuing fallout from the COVID-19 pandemic, declining revenue from a sprawling transit system, housing shortages, sharing the burden of migrants crossing faraway borders, and a disturbing uptick in violence of different kinds all greeted her.

Now Hochul seeks a first elected term, and has moderate and pragmatic plans at the ready that encourage us to support her bid.
Republican Rep. Lee Zeldin's campaign to unseat her rests largely on a growing concern about street violence and criminality that is on many voters' minds. The GOP has made "bail reform" a campaign catchall for multiple changes to state law in recent years to stop overincarceration — changes they claim are the root of the recent crime spike.

Certainly, some legislative fixes were needed, and Hochul got some additional offenses made eligible for bail, for repeat offenders, hate crimes, and crimes committed with a gun. But Hochul knows this will not eliminate the problem. Getting guns off the street, increasing funding for mental health, and reducing the court's COVID-19 backlog so those who should be in prison are sent there swiftly are all essential.

Beyond symbolism, such as vowing to remove Manhattan's elected district attorney and reduce the number of people eligible for parole, Zeldin's crime-fighting strategy doesn't seem detailed or substantive or one that would have an immediate effect even assuming he could get the likely Democratic-controlled legislature to make changes. The executive orders he said he would sign on "Day One" to do so are implausible.

Given the shocking stabbing death in Queens of Lt. Alison Russo, an FDNY paramedic from Huntington, and other horrid irrational acts, Hochul rightly cites mental illness as a major factor in public safety and homelessness. She's driving changes in a state reimbursement system that gave health institutions disincentives to add psychiatric beds, which should result in 1,000 more of them in New York facilities, and she is finding ways to quickly get the personnel needed to staff those beds. Acting with the legislature, the state has expanded Kendra's Law to allow doctors stronger authorization to involuntarily hold people who have acted out and been brought in for observation.

Hochul arrived in the job rightly aware that it's the role of a governor to brake excessive spending plans. She successfully held out in the last budget for keeping a conservative 15% reserve despite shortsighted pressure to reduce that margin. With a blast of federal support due to the pandemic winding down, and signs of fiscal and economic stress and possibly more COVID challenges ahead, that decision looks all the wiser now. She can and must keep up such discipline.

In February, Hochul acknowledged error in — and thankfully withdrew — an ill-conceived proposal to have the state overrule local zoning to allow accessory dwelling units in the suburbs. But Hochul understands the current acute housing shortage and is more wisely exploring other options to expand housing availability in partnership with local governments and looking to new private incentives to build what's needed.

She also has a good grasp of Long Island's economic development needs and seems ready to apply the pressure needed to make the state's Downtown Revitalization Initiative effective. Perhaps the biggest impact Hochul may have Islandwide is deciding whether to sign legislation to make the Long Island Power Authority a fully public utility. She promises transparency in her decision-making.

Zeldin, a former state senator who is now a four-term member of Congress representing eastern Long Island, is well known in these parts as being bright, tenacious, and alert. He did not meet with the editorial board. The thrust of his campaign is that the state is going in the wrong direction, but rolling back the clock to another era is not workable. He supports fracking for natural gas in the Southern Tier, but has offered little in the way of proposals for moving the state toward greener energy generation. He called for restoring jobs and pay for government workers let go for refusing to be vaccinated, which raises the question of how firmly he might deal with a public health crisis.

On abortion, a recent Zeldin television ad said that despite his anti-abortion stance he would not change New York's very permissive state law. However, Zeldin could use his budgetary powers to stop funding for clinics, including their expansion and protection, and rescind regulatory guidelines that allow telehealth services as well as Department of Health programs to give guidance to abortion providers.

It must be noted that hours after the Jan. 6 riot at the U.S. Capitol to stop the certification of Joe Biden as president, Zeldin voted against certifying the 2020 election results, choosing instead to link himself to a shameful episode. What's more, several months later, he acted directly against his own state's interests by opposing a bipartisan infrastructure bill that's financing billions of dollars in needed state projects, especially for his home district.

Those decisions by Zeldin have eclipsed his commendable past work on veterans' issues and oversight of funding for local projects, as well as the constructive bipartisanship he once showed as a state senator.