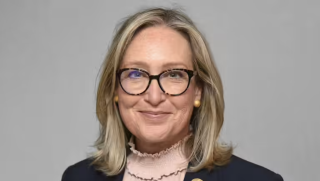 New York’s 1st Congressional District is perennially considered one of New York’s — and the nation’s — real swing regions. It is a place of contrasts, between hard right and deep blue, between Hamptons wealth and people striving at the poverty line. In its current configuration, it stretches from the easternmost forks of Long Island to the Nassau County line. It includes farmland, town and village centers desperately in need of housing, and miles and miles of pristine yet endangered coast.

With Rep. Lee Zeldin running for governor, CD1 this year is home to an open race and even more potential than usual for a competitive contest, featuring two qualified, experienced candidates.

They are Bridget M. Fleming, a former prosecutor and current Suffolk County legislator, and Nicholas J. LaLota, a Navy veteran and former Suffolk Republican elections commissioner currently serving as chief of staff to the county legislature.
Both have long track records of service to their communities. LaLota, 44, is from Amityville which is outside the new district lines. Yet he has a background in the district, within which he attended high school, and he is looking at houses in the new zone. As an Amityville Village trustee in 2014, LaLota and other trustees wanted amendments to the village police contract concerning a freeze on high-earning officers’ base pay. Given the village’s financial constraints, this was an eminently reasonable idea, but one that has earned LaLota enduring enmity from some police union officials.

Fleming, a 62-year-old Democrat from Noyac, was a prosecutor in Manhattan before moving east where she served on the Southampton Town Council for more than 5 years before her nearly 7-year stint on the county legislature. Her knowledge of and commitment to local issues is outstanding, including the minibus pilot program in her district to help replace the loss of fixed bus routes. It’s an initiative for which she says she’d be eager to get funding on the federal level.
That is precisely the kind of drive that CD1 needs in Congress, and why Fleming would be the district’s best representative. She knows that Suffolk County and its hundreds of miles of coastline are on the “front lines of climate change.” That’s not a hypothetical battle, she rightly told the editorial board in her endorsement interview: It impacts the day-to-day lives and budgets of ordinary Long Islanders.

Easy to say, harder to do, and Fleming is ready for the doing: mobilizing federal dollars and resources for electric vehicle charging stations, incentivizing good jobs in offshore wind, and pursuing nature-based solutions to protect shorelines, as opposed to thoughtless hardening that will only exacerbate erosion and push the problem to the next neighbor on the coast.

None of this is abstract for Fleming, who already has her hands deep in this kind of work. That includes the project she helped shepherd to identify vulnerabilities on Suffolk’s coastline and propose investments to mitigate the potential damage. Fleming said this was prompted by a parking lot in Shinnecock East County Park crumbling into Shinnecock Bay. Problem, meet solution.

She sees — and has worked on — the broad picture, from septic improvements to groundwater protection to a project she supported to map the places where solar arrays could be appropriately sited.

LaLota has brought up important concerns in his run, including the dangers of the federal budget getting wildly unbalanced. But Fleming outshines LaLota on granular district issues. One of his top priorities is what he calls “safe drilling on federal land” and loosening regulations toward more oil extraction. He also supports natural gas extraction here in New York. This is the wrong way to tackle the energy and climate problems to come.

LaLota said he would have voted for the bipartisan infrastructure bill passed last year that was so crucial to Long Island’s interests. And as an election commissioner, he worked to certify the 2020 election here and said he’d never be “casting doubt on the national election to the point where the Congress should have voted not to certify.”

But — jarringly — he says he would have voted no on the original, bipartisan commission to investigate the Jan. 6 Capitol attack that passed the House but was blocked by Republicans in the Senate. In explanation, he told the editorial board there should be an analysis of a “more broad range,” including “what political rhetoric leads to.” Asked what kind of other rhetoric he meant, he cited confrontational statements by California Democrat Maxine Waters, whose comments are on a different scale from violent attacks on the nation’s Capitol and democratic process.

Fleming is ready to hit the ground running in service of the residents of CD1, tackling the real challenges facing the district, overcoming those obstacles to make the region a national leader when it comes to preparing for climate change and building infrastructure fit for a prosperous future.