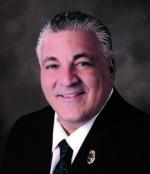 A Republican candidate for Town Board is acknowledging having had several tax liens totaling thousands of dollars against his business, while Democrats are circulating information about the liability and charging theft.

The state liens and tax warrants were brought against Andre Sorrentino and his brother Pat on their PAS Automotive Service in Huntington Station. The 19 judgments entered against them and their company totaled $288,419... END_OF_DOCUMENT_TOKEN_TO_BE_REPLACED 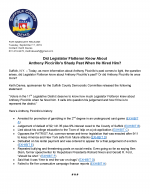 Samuel Gonzalez expected to get Dems' nod for Suffolk Legislature

The Suffolk Democratic executive committee is expected to name Samuel Gonzalez Thursday as the party's candidate in the March 19 special election for the county legislature seat left vacant by Democrat Monica Martinez's departure for the state Senate.

The nomination is expected to be finalized in a late afternoon conference phone call. Gonzalez was recommended by the party’s screening committee.

ALBANY — Democrats on Tuesday seized control of the State Senate from Republicans for only the third time since World War II, flipping as many as four seats on Long Island, according to unofficial results.

Democrats said they rode an anti-Trump blue wave to lead in at least seven races previously held by Republicans, with two more too close to call, and held a hotly contested Democratic seat on Long Island, according to incomplete and... END_OF_DOCUMENT_TOKEN_TO_BE_REPLACED

Letitia James made history on election night by becoming the first African-American woman to be elected attorney general of New York.

James, the public advocate for New York City, also broke barriers as first black woman elected to statewide office in New York, the first woman of any race to be elected as the state’s attorney general, and the first black person to serve in that position.

An unofficial tally on the Suffolk County Board of Elections website had Mr. Lys winning 6,177 votes to Mr. Vilar's 2,728. Appointed to fill the seat occupied by Peter Van Scoyoc following his election as supervisor last... END_OF_DOCUMENT_TOKEN_TO_BE_REPLACED

With all precincts reporting, East Hampton businessman Perry Gershon had 36 percent of the vote to 30 percent for former Suffolk Legis. Kate Browning, who called Gershon late last night to congratulate him.

Three other challengers had 34 percent of the vote combined.

Stern, 49, of Dix Hills, defeated Huntington attorney Janet Smitelli 59 percent to 41 percent, with all precincts reporting. He will... END_OF_DOCUMENT_TOKEN_TO_BE_REPLACED