Jobs and the Economy 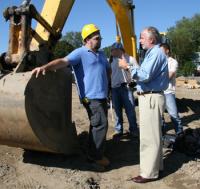 I have long fought to protect good-paying Long Island jobs.

When Republicans in Congress tried to slash funding to Brookhaven National Laboratory, I successfully fought against their severe cuts and saved 1,000 middle-class jobs. And when the Federal Aviation Administration (FAA) proposed moving the New York Air Traffic Control center in Ronkonkoma and the New York Terminal Radar Approach Control facility in Westbury off Long Island, I spearheaded the effort to keep the facility on Long Island and saved 950 jobs in the process.

I have secured over $1 billion in direct federal investment to Long Island, creating jobs and expanding the economy.

These investments increased funding for high-tech research at Brookhaven National Laboratory, including the new Center for Functional Nanomaterials and the National Synchrotron Light Source II, while also creating over 1,000 construction jobs. These projects and others like them at local colleges like Stony Brook University are the building blocks of scientific innovations that will ensure that Long Island remains competitive in the global economy.

I believe that investing in high-tech research and innovation is how you create jobs.

That’s why I am a cosponsor of the TRANSFER Act, which creates grant opportunities for innovative technology transfer activities at universities, research institutes and federal laboratories like Brookhaven to accelerate the commercialization of federally-funded research and technologies.

As the ranking member of the Water Resources and Environment Subcommittee, I was an author of the bipartisan Water Resources Reform and Development Act that secured millions in federal funding for Suffolk County’s beaches, harbors and waterways and promotes Long Island’s competitiveness, prosperity, and economic growth. Not only will this legislation protect homes and business from future disasters, but it will also create thousands of jobs.

I believe more job training is vital for Long Island to remain competitive in the 21st century.

That’s why I fought to pass the Workforce Innovation and Opportunity Act that helps Long Islanders gain education and training to will help them succeed in the global economy and match them with employers seeking these skills. Long Island workers are the best in the country and we need to give them the tools to lead the 21st century economy.