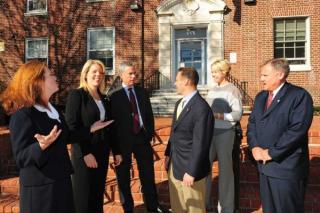 After a firestorm of criticism, Islip officials say they are considering privatizations, layoffs, downsizings and closures as a means to reduce the proposed 65 percent town property tax increase for the 2013 budget.

Councilman Anthony Senft, a Conservative on the Republican-majority town board, said the goal is to minimize town government's footprint by reducing spending before increasing revenue, though he said there is no specific plan for cuts yet.

"There is no way I will vote for a 65 percent tax increase," Senft said of the budget announced in September and due to be finalized next month. He said the town is looking at privatizing entities such as its hatchery, marina and golf courses and closing or restructuring parks, pools and senior centers.

"We're talking about modifying the way we're doing business as it relates to all town activities, from hatchery operations to harbor patrol operations to using the services of an armored car service," Senft said.

The proposed 2013 town budget attempts to address a projected $26 million budget shortfall. The 65 percent town property tax hike would mean no change in town services or closures of public parks, pools or senior centers. But the $118.9 million budget, a 1 percent decrease in spending compared with the current year, and its proposed tax hike drew sharp criticism at an Oct. 9 public hearing.

Two hours of testimony at the hearing during which the town board voted to shatter the state-mandated 2 percent tax cap was often antagonistic, with public safety officers threatening to remove a few residents. The town tax rate is lower than it was in 1984, officials said; the proposed tax hike would increase the average Islip homeowner's town tax bill by $18 a month.

Councilman Steve Flotteron said he hopes they can get that monthly tax increase down to single digits before they have to vote on the budget Nov. 20. "But there's only so much to do to find millions of dollars," he said.

Councilwoman Trish Bergin Weichbrodt said she's concentrating on the continued sale of town property to increase revenue and inch down the proposed tax hike. "We hear so much feedback from the community, and we're hearing it from both ends," she said. "People are saying please don't close our programs, but please don't raise our taxes, which puts us in a very precarious position."

Town spokeswoman Inez Birbiglia said every percentage point of the proposed 65 percent increase represents $425,000. So selling or privatizing a town entity such as the hatchery, which costs about $542,000 to run, would enable the town to decrease the proposed tax hike by a little more than 1 percent.