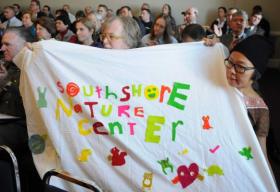 But after public comments ended Tuesday, the board voted, 5-0, to abolish 35 positions in the town -- 26 full-time and nine part-time jobs -- in a move that seemed to seal the fate of the pared-down 2013 budget. The spending plan includes a 28... END_OF_DOCUMENT_TOKEN_TO_BE_REPLACED 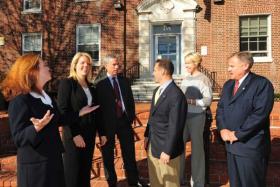 After a firestorm of criticism, Islip officials say they are considering privatizations, layoffs, downsizings and closures as a means to reduce the proposed 65 percent town property tax increase for the 2013 budget.

Councilman Anthony Senft, a Conservative on the Republican-majority town board, said the goal is to minimize town government's footprint by reducing spending before increasing revenue, though he said there is no specific plan for cuts yet.

"There is no way I will vote for a 65 percent tax increase," Senft said of the budget announced in September and due to be finalized next month. He said the town is looking at privatizing entities such as its hatchery, marina and golf courses and closing or restructuring parks,... END_OF_DOCUMENT_TOKEN_TO_BE_REPLACED