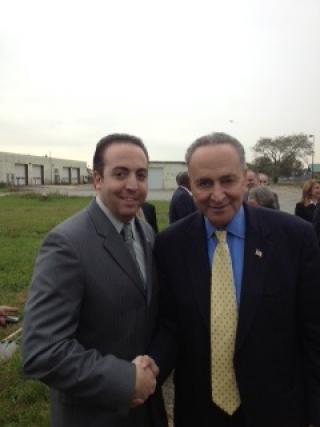 "Senator Schumer knows the concerns of middle class taxpayers and is a hard-working advocate who went to the halls of government for one reason: to make a change for the better. I am deeply honored that Senator Schumer has endorsed my candidacy and I look forward to working together on behalf of the people of Long Island," said Dujmic.

Charles E. "Chuck" Schumer is the senior United States Senator from New York State. Schumer was first elected to the U.S. Senate in 1998 and was subsequently re-elected in 2004 and 2010. Before his election to the Senate, Chuck Schumer served in the State Assembly for three terms and the U.S. House of Representatives for nine terms. He is currently the third-ranking Democrat in the Senate and the chairman of the powerful Senate Rules Committee.

In his near four decades of public service, Chuck has built a reputation as a leader in finding common-sense solutions to national issues and a tireless fighter for New York. He has been a staunch supporter of helping small business in New York; providing strong consumer protection; outlawing the civilian use of assault weapons; and upholding a strong U.S. commitment to the security of Israel.