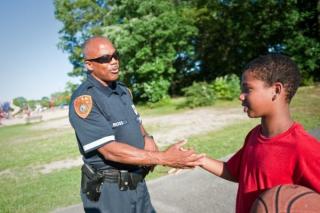 Violent crime has been cut by more than a third in Brentwood in the past three years because of increased police patrols, community renewal efforts, and an expansion of neighborhood watch groups.

Violent crime such as murder, rape and robbery has dropped from 223 occurrences in 2009 to 95 as of Aug. 31, the most recent date for which statistics are available. That's on pace for a reduction of about 36 percent.

Three years ago, the shootings of two young teens, one fatal, within five months galvanized efforts to stop the gang violence that had plagued Brentwood for years.

Police officials assigned Third Precinct Officer Charles Ross to create neighborhood watch groups in 2009. Watches in Brentwood have increased from none to 48 and are growing, Ross said. He also interacts daily with kids as young as elementary school age.

Third Precinct Insp. Jan L. Rios said that when police become aware of a gang hangout, it "becomes a point of repeated and relentless attention" from the plainclothes Gang Unit and uniformed officers.

"Most congregating at this point in time is occurring in private residences, as well as a couple of quasi-private commercial establishments," Rios said, referring to places such as bars and delis.

"I see a lot of positive in this community," said Erica Boynton, whose son Christopher Hamilton, 15, was shot to death in 2009. "It's still a struggle with the kids, but people are coming together and sticking together."

Longtime residents such as Boynton say they also understand the tenuousness of progress.

The densely populated hamlet in northern Islip Town -- home to 60,000 people, 69 percent of them Hispanic, with a median household income of $68,750 -- has been synonymous with gang violence that would peak in summer.

"It was . . . a very quiet summer compared to the last three or four summers," resident Lenny Tucker said of this year. But he added he worried that violence "spiked" at the end of August, referring to two fatal shootings -- one at a house party, one outside a sports bar.

Tucker, who works in Brooklyn, said his son, now 16, was hit in the arm by a stray bullet last summer. "I've had more bad stuff happen to me in Brentwood than I ever had in the city," he said. "These are things we are trying to address."

The transformation of Freeman Avenue Park exemplifies the change in Brentwood.

For years, it was known as a gang hangout, littered with broken bottles, drug paraphernalia and graffiti-covered fences.

Evelyn Dominguez, a 40-year-old mother of five whose home shares a property line with the park, recalled the smell of marijuana wafting through the air and teens at the park throwing beer bottles into her backyard -- as recently as last year.

She said she remembers waking up to gunshots on an August night in 2010, when Rigoberto Gomez, 19, was murdered at the park in a gang killing.

But one evening last month, a dozen young children huddled on a tarp, staring up at a projector screen as the opening credits of "Toy Story 3" began to roll.

Other children shrieked and scrambled over a colorful new jungle gym as parents barbecued hamburgers.

"It was scary here," Dominguez said. "Now I see children playing here all the time."

Early this year, the park was cleaned of used needles and condoms, trees were cleared to remove potential hiding places, and new playground equipment, walkways and motion-detecting lights were installed through a collaboration of the Brentwood Association of Concerned Citizens and the Town of Islip.

The initiative for change acquired greater urgency in June 2009, when Wilson Batista, 13, was shot in the head and critically wounded while playing basketball at Timberline Park. Five months later, Boynton's son was fatally shot at a party by an MS-13 gang member on the front lawn of Tucker's house.

In March 2010, Joel Nieves, 16, was shot five times in the back while walking home from night classes in Brentwood. Five months later, Gomez was shot dead.

Taking back the streets

In spring 2010, neighbors and church leaders began launching peace marches, rousing and uniting what they say had been an uninvolved and fractured community.

"The community was looking for anything," Ross said. "They just wanted answers. 'Why is this happening? What are we doing to prevent it?' "

The Brentwood Association of Concerned Citizens -- Boynton and Tucker are founding members -- was formed to rally residents to take back their streets. The group helps clean up parks, gives talks at local schools, and plans community events.

On patrol one summer evening, Ross pointed out what is now Brentwood Community Gardens -- a lush garden that used to be a dumping ground for trash and drug needles, he said. Nearby is a newly built youth mentoring center that also serves as a meeting place for community groups. Formerly gang-ridden parks like Freeman Avenue and Timberline, re-branded last year as Roberto Clemente Park, are now usually populated in afternoons and on weekends by children and families.

"We're going to take back our streets one block at a time," Ross said.