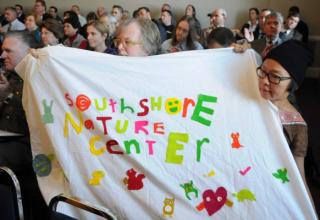 But after public comments ended Tuesday, the board voted, 5-0, to abolish 35 positions in the town -- 26 full-time and nine part-time jobs -- in a move that seemed to seal the fate of the pared-down 2013 budget. The spending plan includes a 28 percent tax increase, a leaner workforce and fewer town services.

"I'd love to have a town where we don't have to lay hardworking Americans off in this very difficult economic time," Supervisor Tom Croci said. "But this board was not left with a financial situation that affords us this luxury. These are things you deserve. You deserve to have a nature center that is staffed and has programs, and it would be very nice if the town board could provide that."

Councilman Anthony Senft said board members are meeting with private agencies -- such as The Nature Conservancy in East Hampton -- to potentially work out a private/public partnership, and he stressed that the center is not closing and will not be developed. In 2013, Islip will end funding for the center, which previously operated on $82,400 contributed annually by the town.

But there were no similar promises for the harbor police, whose division will be eliminated and personnel laid off. Several of those bay constables spoke at the hearing, and one town resident who said he "wouldn't be here today" if not for the harbor police told the board his story.

"I was surfing on Fire Island, lost my board, got caught in a rip current and was sucked into the inlet and was fortunate enough to grab onto a buoy," said Brandon Ramunto, adding that two bay constables from Islip -- Jonathan Mentzel and Mike Handelman -- were the only people willing to brave the rough waters of the inlet to lift him to safety.

"I saw their boat almost tip three times, go vertical, it was just unbelievable in such a small boat that they went into that situation for me," Ramunto said. "They saved my life. Without them . . . the waters are going to be a lot more dangerous."

In a more upbeat portion of the meeting, the board awarded NYPD officer Larry DePrimo with a citation. DePrimo, a Holbrook native, achieved viral fame two weeks ago when a tourist photographed him giving boots and socks to a barefoot homeless man on a cold night in midtown Manhattan.