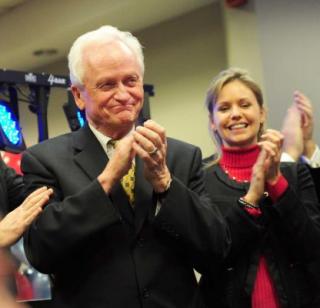 Suffolk Democrats Monday night named William J. Lindsay, the son of the term-limited presiding officer of the Suffolk Legislature, to succeed his father, but left the nominations for four other legislative seats open for now.

The convention, held at the IBEW Local 25 hall in Hauppauge, also deferred a decision on a six-way battle for the North Fork's 2nd District Assembly seat nomination, so town committees, meeting during the next 10 days, can vote on the contenders.

The younger Lindsay, 40, of Bohemia, is in the insurance business and is making his first run for office.
Republicans have named Anthony Musumeci, 36, of Bohemia, who lost to William Lindsay the elder two years ago, 54.3 percent to 45.7 percent.

The selection of the younger Lindsay came on a unanimous voice vote after his father, who is battling cancer, put his name in nomination.

"I know he will be successful because all of you will help him get elected," said the elder William Lindsay, who received a standing ovation from a crowd of about 230 people.

Except for the elder Lindsay, who is barred from running under the county's 12-year term-limit law, Democrats named all 10 party incumbents along with Legis. Kate Browning, a Working Families Party member from Shirley, and Legis. Jay Schneiderman, an Independence Party member from Montauk -- both of whom also run on the Democratic line.

Democratic chairman Richard Schaffer said the party so far has not found candidates to run against Legis. Thomas Muratore (R-Ronkonkoma) in the 4th District, Thomas Cilmi (R-Bay Shore) in the 10th district or Thomas Barraga (R-West Islip) in the 11th district. The party also does not have a contender for the 13th district vacancy created because GOP Legis. Lynne Nowick is term-limited and cannot seek re-election.

The convention authorized Schaffer to fill those nominations later. "It's gotten more and more difficult every year to find people to put themselves out there to run for public office because of the commitment involved," Schaffer said. Republicans earlier left three state and county legislative nominations vacant at their convention a week ago.

Democrats deferred making a final selection among those seeking the seat of former GOP Assemb. Daniel Losquadro, who was elected Brookhaven highway superintendent earlier this year.