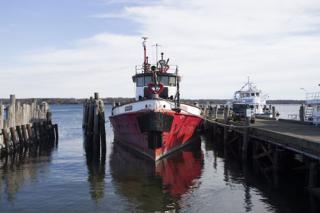 The Railroad Dock on Third Street in Greenport is no longer under county control.

In a unanimous vote Tuesday, the Suffolk County Legislature ended its lease with property owner Metropolitan Transit Authority. Greenport Village will now hold the lease directly with the MTA.

Legislator Al Krupski (D-Cutchogue) called the move a win-win. He said managing the property was costly for the county but an amenity to the village.

“We took out a layer of bureaucracy,” Mr. Krupski said. “Instead of the county, MTA and Greenport being involved, we can let them handle their own issue, which they should. I’m a firm believer in local control. The county shouldn’t be involved there.”

Since the early 1980s, the county has acted as a middleman, leasing the property from the MTA and then subleasing it to the village for a token fee of $1 a year. The village handled the daily maintenance of the property while the county managed long-term capital projects.

Since last year, both Mr. Krupski and the Greenport Village Board had been hoping to rework the details of the arrangement after the county and the village butted heads about whether the floating nonprofit fireboat museum, Fire Fighter, could remain docked at Railroad Dock.

With the county out of the equation, the village, which has been leasing space to Fire Fighter without county permission, plans to offer the historic vessel a permanent port at the dock, said Village Trustee George Hubbard.