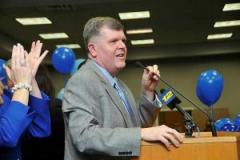 The campaign pieces are choking voters’ mailboxes, the TV ads are all booked, the town halls and debates at which candidates have spoken out are over — and now comes the most crucial battle, to actually drag voters to the polls.

“No one is waking up on June 28 rushing to vote and there certainly aren’t going to be any lines at the polls,” said Richard Schaffer, Suffolk Democratic chairman. “And this is going to be a ground game on steroids because every vote you bring out is worth 20 votes in a general election.”

In a year in which New York already has held a presidential primary and will hold its normal primaries for state and local office in September, the June date — imposed by federal courts to ensure military balloting — makes the congressional primaries an afterthought.

Getting voters to the polls — always important in a low-turnout primary — is especially crucial in the 3rd District contest, where five Democrats are battling to succeed retiring Rep. Steve Israel (D-Huntington).

They have been knocking on doors and making phone calls to try to identify potential supporters. This weekend, all sides and their union backers, volunteers and paid canvassers are on the street in a final blitz to mine for supporters.

“It doesn’t matter how many people think you’re the best candidate,” said Suozzi, who has won two countywide primaries but lost a statewide race to Eliot Spitzer. “What matters is how many people you get to show up and vote.”

Among Suozzi’s canvassers is his daughter Caroline, 21, a Fordham University student, and his sons Joseph and Michael.

Suozzi’s wife, Helene, led an effort to get backers to send out personal “Do me a favor” notes to get friends to vote for her husband. Initially, 5,000 cards were printed, with some staffers thinking they would never all be used, said Kim Devlin, Suozzi’s campaign strategist. “We reordered twice and this morning sent out 14,000 cards,” she said last week.

Kaiman said reaction to his canvassing also has been positive.

“I have a long history with voters and a track record. . . . I hope that history matters,” Kaiman said. But he added that with heavy spending by other candidates, “there’s always a risk some people might switch.”

Backers of Anna Kaplan, a Democratic North Hempstead Town Board member, said her TV ads along with eight mailings from the independent expenditure arm of the nonprofit Emily’s List — which works to elect Democratic women who favor abortion rights — brought a flood of volunteers, particularly since Kaplan is the lone woman in the race.

“When she knocks on doors she is the only candidate doing it in heels,” said Reginald Johnson, Kaplan’s spokesman. Johnson also said that as an Iranian refugee, Kaplan also has connected with many immigrant groups and has strong ties to Queens as a former decadelong resident. The 3rd District includes parts of Nassau, Suffolk and Queens.

Attorney Jonathan Clarke, who personally collected 1,000 signatures to get on the primary ballot, said he is concentrating on reaching progressives who, like himself, support Bernie Sanders for president, and that he has volunteers from Montauk to Queens making calls for him.

Schaffer said he believes that, as the only candidate from Suffolk County, Suffolk Legis. Steve Stern (D-Dix Hills) will pull the bulk of the 30 percent of the vote from the county.

“We have one candidate while Nassau’s four contenders will split their county’s vote,” said the party leader, who supports Stern.

Schaffer said he will walk election districts for Stern to bring voters out Tuesday, but not to generate a bigger turnout.

“You only pull voters you know are with you,” he said.