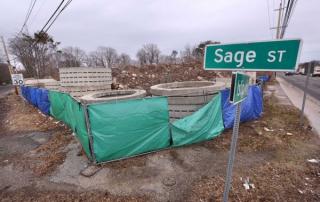 It's grand that cleanup is slated to begin this week at a contaminated dump site in Central Islip.

But the fact that most of the tainted material will be trucked off Long Island -- because hydrocarbons, pesticides and metals found in the material represent a danger to groundwater -- makes the dumping all the more outrageous.

Under an agreement between state environmental officials and the site's owner, as much as 35,000 cubic yards of fill will be removed and shipped to a disposal facility in Pennsylvania.

The material -- estimated to be enough to fill almost 11 Olympic-sized swimming pools -- will leave the site in trucks, according to a story Monday by Newsday reporter Jennifer Barrios.

Five tractor trailers, each capable of handling as much as 35 cubic yards at a time, will move in and out of the neighborhood until the site is cleaned.

Yes, residents near the lot at Sage Street and Islip Avenue -- one of four locations named in Suffolk District Attorney Thomas Spota's probe into alleged illegal dumping in and around the Town of Islip -- have reason to celebrate.

Because the eyesore, overgrown with brush, at some point will be gone.

And neighbors likely will be pleased that authorities will put into place a variety of measures to increase safety by controlling dust and decrease disruption by setting and informing the community of the hours when trucks will go in and out of the site.

Last year, six men and four companies were indicted in connection with the district attorney's investigation, which also includes Roberto Clemente Park in Brentwood, state-protected wetlands in Deer Park and a development with a half dozen homes for veterans.

The owners of the Sage Street/Islip Avenue site, L-C Real Estate Group, have not been charged in connection with the dumping case.

Attorneys for the firm, which is paying for cleanup, including removal of contaminated debris to Pennsylvania, say L-C Real Estate is a victim.

Meanwhile, the firm, in a civil suit against some of the defendants indicted in the dumping case, is estimating the cost of cleanup at between $1.4 million and $3 million.

It's been a year since consultants for Spota determined that the Central Islip site included contaminated materials.

Which makes the beginning of this cleanup especially welcome -- even as residents of neighborhoods near all of the alleged illegal dumping sites wait for criminal charges stemming from the case to be resolved.

One step at a time.