Tom Suozzi's former opponents back him for Congress 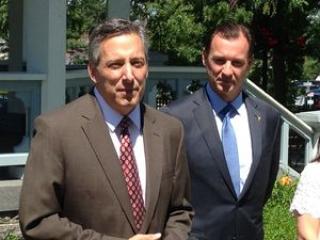 “This wasn’t really about any one of us. This was about our district, our community and our country,” former North Hempstead Town Supervisor Jon Kaiman said at a news conference in Manhasset, two days after Suozzi’s primary victory Tuesday.

The Democrats need unity to keep the seat in their hands and keep up the fight in Congress for abortion rights, gun control and the environment, Stern said.

All five share the goal of “bringing good people of good will” together to solve national problems, said Suozzi, a former Nassau County executive and Glen Cove mayor.

“This do not get done in this country because people are so stuck at their polar opposite extremes and spend all their time yelling at each other instead of solving problems,” he said.

Suozzi won 35 percent of the votes in Tuesday’s primary. His former opponents’ support will be key in North Hempstead, where Kaiman and Kaplan dominated, and in Suffolk County, where Stern “clobbered” Suozzi by 33 percent of the 4,656 votes there, Suozzi said.

Martins’ campaign strategist E. O’Brien Murray questioned how much impact the other Democrats’ backing will have for Suozzi.

“The turnout was less than 10 percent, more than two-thirds of the voters rejected Tom Suozzi and having a forced picture with the other candidates is not going to unify the party,” Murray said.

Following a campaign light on mudslinging, the Democrats praised Suozzi’s past accomplishments.

Clarke, who ran a shoestring campaign as a political outsider, called Suozzi one of his heroes and said he can motivate people to get involved in politics who might not participate otherwise.

“I fully believe that ... a progressive is someone who can take on big challenges with big ideas,” Clarke said. “I think Tom is one of the few people that has the ability to do that.”
The Democrats have about 40,000 more active registered voters than Republicans in the district stretching from Whitestone, Queens, to Kings Park in Suffolk County.

But primary turnout was anemic at about 10 percent with 18,487 votes counted.

Suozzi said he expects the presidential race between Republican Donald Trump and Democrat Hillary Clinton to draw more attention from local voters than the congressional primary. He said he plans to hold about half a dozen town hall-style events to talk issues with voters, likely starting with gun control in July.

Suozzi will most likely face Martins, Mineola’s former mayor, in November, but Philip Pidot of Glen Cove is trying to force a rescheduled Republican primary in federal court.