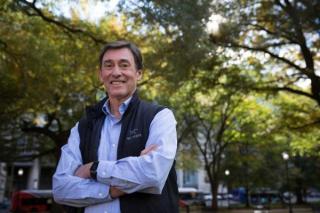 Former Rep. Tom Downey, onetime wunderkind of Suffolk politics whose 18 years in Congress began in the Democratic tidal wave after Watergate, is about to retire from his second career as a powerhouse Washington lobbyist.

The formal announcement came in a release last week in which Downey, 66, disclosed he would "close operations" of the firm he founded in 1993 to now pursue opportunities as an unpaid advocate. His longtime partner, former House Republican colleague Ray McGrath of New York, will carry on alone.

What made Downey's electoral career extraordinary for local Democrats is that he is a line of demarcation from a time when Republicans dominated Long Island's electoral landscape to the current era, where Democrats across the Island now hold a slim voter-registration edge.

Downey launched his career as a Suffolk County legislator at age 22, winning with three older Democrats in what had been an 18-0 Republican legislature. At 25, Downey became an overnight national figure in 1974 as the youngest of the 78 Democratic freshmen to win seats amid public anger over Watergate. He was so young that Downey was often mistaken for a page.

Over 18 years in Congress, Downey, often brash and hard-driving, was at various times a member of the Armed Services Committee and later a powerful member of the House Ways and Means Committee.

"I'd like to think if I accomplished anything it's that we showed Democrats would win a very Republican suburbia," Downey said last week. He also gave followers a road map for victory. "There's no substitute for retail politics, standing in the shopping center, going to Eagle Scout courts and knocking on doors," he said.

Downey not only started Halpin on his career, but Suffolk Democratic chairman Richard Schaffer, at age 11, began in politics by dropping literature door to door with Downey's kid brother Jeffrey, in return for sodas and slices of pizza. By 14, Schaffer was running party phone banks and won office as a county legislator at age 25. He has been Babylon Town supervisor for 14 years and party leader for 15.

Downey also had a strong hand in the career of Rep. Steve Israel (D-Huntington), who once led the party's congressional campaign committee nationwide, and many others.

Schaffer said Downey made grassroots politicking key in an era when GOP campaigns consisted of candidates "handing out nail files and potholders with their names on them." He said each weekend Downey and his family would invite supporters to their home, election district by election district.

In the end, Downey's own electoral career became a cautionary tale for future candidates. Downey lost to Republican Rick Lazio in 1992 after riding on a lobbyist's Jet Ski while on a junket; and his former wife worked as an auditor in the House post office during the Rubbergate scandal, in which many House members bounced checks.

However, even as a lobbyist, Downey always maintained Beltway influence. He is a close friend of former Vice President Al Gore, who once used him as a surrogate to prepare for his televised debates.

Closing his lobbying firm, Downey said, was "a personal decision," not connected to Capitol gridlock. He said it will give him time to pursue issues he cares about, such as climate change, hunger and the illegal trafficking of young women. "I'll be doing good things, but not be paid to do them," he said.

Some say Downey may be shutting down the firm to possibly look for a place in a new Democratic administration.

Robert Zimmerman, a national Democratic committee member, said Downey's next course may be uncertain, but he will always have an impact.

"It makes good sense for him to go back to his roots in his latest chapter of life," he said. "He always has been influential and what people may not appreciate is that he is a dynamic advocate. "