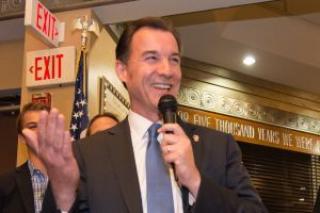 Former Nassau County Executive Tom Suozzi on Wednesday savored his first step toward a possible political comeback following a victory in a low-turnout congressional primary Tuesday that relied heavily on grass roots efforts in Queens and his home base of Glen Cove.

Suozzi, who aired no TV ads in the primary, acknowledged that in winning the five-way race, he used up the bulk of his $800,000 campaign funds. But he said he has about $80,000 from donors whose contributions exceeded primary limits and are reserved for the general election.

Suozzi plans a unity event Thursday in Manhasset with his former foes.

Previewing his campaign before an election night audience Tuesday, Suozzi said, “People have been screaming at each other for 30 years on issues like gun control, immigration, and climate change. Something’s wrong. I’m not running to get the job. I’m running to do the job and start solving people’s problems to make their lives better.”

“It’s amazing in this day and age that you declare victory when two-thirds of the voters rejected you,” Murray said.

Jay Jacobs, Nassau Democratic chairman, countered, saying, “A win is a win.” Jacobs said Martins will have “a heavy lift selling the extremely conservative agenda” put forward by Republicans. Democrats also have a 40,000 edge in voter enrollment in the district.

Suozzi did best in his hometown of Glen Cove — where the former mayor got nearly 75 percent of the vote and where turnout was nearly 25 percent — and in the Queens portion of the district, where he polled 1,511 votes compared with 814 for Kaiman and 323 for Stern.

Suozzi backers worked to get out the vote through the day Tuesday. Campaign consultant Kim Delvin said she was knocking on doors in her Sea Cliff apartment building at 8 a.m., while Suozzi’s daughter, Caroline, did an automated call at 8 p.m. to last-minute voters.

Suozzi made the tactical decision not to spend money on canvassing or mail in North Hempstead, where he was likely to come in third no matter how much he spent, campaign aides said. Kaiman won his hometown by 1,117 votes over Suozzi. Stern, who ran TV ads, similarly won Suffolk with 2,540 or 54 percent; Suozzi, who mailed and had canvassers in Suffolk, came in second with 1,044 votes.

Melinda Katz, the Queens borough president, who endorsed Suozzi, said he won Queens because he worked the area early on and made his case.

“Tom came out and talked to the people in Queens and listened to what we need to move forward,” she said.