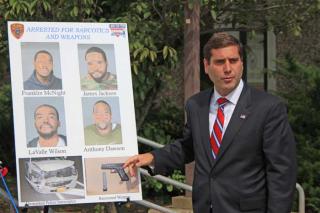 According to SCPD commissioner Timothy Sini, members of the department’s elite Firearms Suppression Team were conducting surveillance in the Bellport area when they spotted a 2015 Dodge Durango driving erratically. The officers followed the vehicle to Victory Avenue in Shirley, where they then attempted to make a traffic stop. As the officers approached the car, the driver took off, prompting a brief chase. The perpetrators ultimately turned onto Candido Avenue, a dead-end street, turned around and headed right for the officers. “The driver of the vehicle, Anthony Dawson, drove his vehicle right into the police vehicle, hitting it head-on,” Sini said, pointing to a photo of the damage. The vehicle attempted to take off again, but the two officers were able to stop the car by rear-ending it.

A half-ounce of heroin and loaded Glock 22 40-caliber gun that Sini said was stolen out of state were retrieved from the vehicle. Dawson, 35, of Medford and two passengers, Franklin McKnight, 25, and Lavelle Wilson, 24, both of Coram, are known members of the Bloods street gang, police said. The fourth individual, James Jackson, 22, of Mastic Beach, is an associate of the gang. All four men were charged with assorted drug charges as well as criminal possession of a weapon. Dawson was charged with criminal mischief, reckless endangerment and unlawful fleeing, Sini said.

According to Sini, FAST officers are mostly plain-clothed officers who are dispatched to deal with gang activity, firearms and drugs. “They have been instrumental in our fight against gangs in Suffolk County,” he said. “Let me be clear. We are out there in full force. The SCPD has deployed significant assets in areas to target gang members and we will not stop.”

Though he declined to name the officers who made the arrests, he did say both were uninjured.