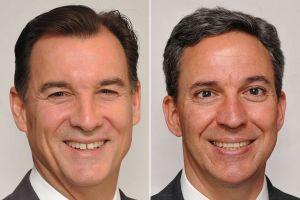 Fifty percent of the 613 likely voters polled said they would back Suozzi, the former Nassau County executive, while 34 percent chose Martins, a state senator from Old Westbury. Fifteen percent said they were undecided or had no opinion.

The poll was conducted Sept. 28-29 and Oct. 2-5, with a margin of error of plus or minus 4 percentage points. Its sampling closely mirrors the registration breakdown of the district that runs along the North Shore from western Suffolk County, through Nassau and into eastern Queens: 37 percent Democratic, 31 percent Republican and 26 percent not belonging to either major party.

With about a month before the Nov. 8 general election, Suozzi, of Glen Cove, is also running ahead of Democratic presidential nominee Hillary Clinton in the 3rd District. Clinton held a 47 percent to 38 percent lead over GOP nominee Donald Trump among respondents. Seven percent supported minor party presidential candidates and 8 percent said they didn’t know or had no opinion.

Some of the difference between Suozzi’s lead and Clinton’s comes from Republican and independent voters, many of whom said they know little about Martins, the former Mineola mayor who has served in the State Senate since 2011.

Suozzi leads Martins 37 percent to 32 percent among independents, and is getting 25 percent of support from Republicans — while Martins only has 9 percent of Democratic voters on his side.

“If Martins wants to get in the game, he obviously has to bring Republicans home,” said Siena College pollster Steven Greenberg. “But he also has to get the independents to look like they do in the presidential race, because this is a district that has more Democrats than Republicans.”

The 3rd District seat is being vacated with the retirement of Israel (D-Huntington), an eight-term representative who has held leadership positions with House Democrats’ campaign arm. Suozzi won a five-way primary to secure the Democratic nomination, while Martins successfully avoided a GOP primary by waging a string of court battles over the validity of his opponent’s candidacy.

The court cases constituted the bulk of media attention given to Martins’ campaign from May into September, and Greenberg said it may have affected the number of likely voters who say they still don’t know who he is.

Forty-four percent of poll respondents said they viewed Suozzi favorably, with 29 percent holding an unfavorable opinion. Twenty-seven percent said they didn’t know or had no opinion of Suozzi, who was county executive from 2002 to 2009.

Martins was viewed favorably by 23 percent of likely voters and unfavorably by 18 percent. But 59 percent said they didn’t know him or had no opinion.

“Jack Martins is unknown to the voters of this district,” said Greenberg.

“In the 2016 election cycle, one month is more than a lifetime,” said Martins spokesman O’Brien Murray, calling Suozzi a “self-serving politician” who had accepted a large pay raise while county executive.

“We are confident that as voters continue to learn about Jack Martins’ record of working in a bipartisan manner to deliver tax relief, combat the heroin epidemic and protect our environment, they will support him,” Murray said.

Responding to the poll results, Suozzi campaign manager Mike Florio said in a statement: “Tom Suozzi will continue to campaign hard, focus on the issues, and remind voters that he will take on the powerful interests, even his own party if necessary, to represent the people he serves. As he always has.”

Poll respondents most often chose jobs and the economy as the single most important issue they wanted their congressman to tackle, with keeping America safe coming in second. But on the topics that tend to split voters by party affiliation, the answers swung between the right and left.

Sixty-six percent support a path to citizenship for immigrants without legal documents, 75 percent said climate change was a real, significant threat to our planet, and 56 percent said they’re more of a gun control supporter than Second Amendment supporter.

But 51 percent said they’re in favor of repealing President Barack Obama’s Affordable Care Act and 45 percent said they would like to see Republicans maintain control of the House, as opposed to 43 percent who want Democrats to take over.

Kristen Mantikas, a registered Republican from Glen Cove, said health care was one of her biggest issues.

“I’m not happy at all with how things have gone the last eight years. My policy got cut and it went downhill from there,” said Mantikas, 45, who works for a nonprofit.

She said she is inclined to vote for Martins, but knows almost nothing about him. “There hasn’t been much out there,” she said of television ads or mailers from Martins. “To be perfectly honest, if I saw him on the street I wouldn’t know what he looks like.”

Sidney Dein, a registered Democrat from Plainview, said he is voting for Suozzi.

“I thought he did a fairly good job as the Nassau County executive,” said Dein, 89, a retired civil engineer. “And he’s a Democrat, which helps, because I’d definitely like to see a more Democratic Congress.”