Suffolk police: Violent crime down in 1st quarter of 2017 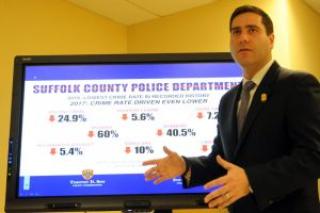 Crime in Suffolk County, already at historic lows in 2016, is down 7.2 percent so far this year, Police Commissioner Timothy Sini said Wednesday.

Sini said the opiate epidemic remains the biggest challenge facing Suffolk police. His cops have executed 54 drug-related search warrants this year compared to 30 in the first quarter of 2016. Police seized illegal firearms during 18 of the drug search warrants executed in 2017, the police commissioner said.

“I think this has an impact on crime,” Sini said. “You are disrupting operations before they get too significant, you are taking guns and drugs off the street, you are locking criminals up. You are sending a message we won’t tolerate criminal operations in our neighborhoods.

“It sends a very clear message when the Suffolk County police come through your town and lock you up,” Sini added.

Another reason for the decline in crime, Sini said, is the Suffolk police crackdown on MS-13 after two Brentwood girls were allegedly killed by gang members with baseball bats and machetes in September.

The commissioner said more than 150 MS-13 members have been arrested since Kayla Cuevas, 16, and Nisa Mickens, 15, were slain last year. More than a half-dozen members of the gang were charged in the girls’ killings, according to a federal indictment unsealed March 2.

“Our long-term objective is to eradicate MS-13 from that community,” Sini said.

There were 36 homicides in Suffolk County last year, up from 25 in 2015, an uptick Suffolk police attributed to gang activity.

Homicides, however, have declined 60 percent so far in 2017. Police said there have been two this year, compared to five in the first quarter of 2016.

Suffolk police have also beefed up traffic enforcement and educational efforts, and that has led to a dip in motor vehicle crashes and fatalities. Crashes are down 7.7 percent this year and motor vehicle fatalities have decreased 10.5 percent.

“Guns and gangs and drugs are issues we are going to be combating aggressively but we are all more likely to be injured in a motor vehicle crash,” Sini said.

Motor vehicle thefts, however have increased from 178 in the first quarter of 2016 to 193 so far this year.

“The message is, please don’t leave the car running when you are in 7-11,” Sini said. “That is where the thefts are occurring.”