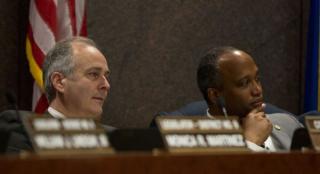 Suffolk County lawmakers passed a $2.9 billion budget Wednesday that relies on more than $117 million in one-time revenue and an "optimistic" sales tax forecast to balance the spending plan.
Lawmakers said they were forced to make difficult choices: more than $10 million in cuts to bus services, reduced payments to nonprofits and increased fees to register vehicles and file mortgages.

The budget goes to County Executive Steve Bellone, who can accept it or veto portions. He will review changes made by the legislature, spokesman Justin Meyers said.
Cilmi said the budget relies too much on one-time gimmicks. "While I understand our desire to put something on paper that looks balanced, we're pretending. It's not balanced," he said.
Legislative supporters said the budget improves on Bellone's 2016 budget proposal, which estimated $30 million more in sales tax revenue than is expected and had steeper cuts to nonprofits.
"It's a matter of doing what we have to do for the people that depend on us, for the infrastructure that depends on us," said Legis. William Spencer (D-Centerport).
The budget keeps a police district property tax increase of 2.9 percent for the average homeowner, to cover rising police contract costs.

"Every year we're playing the shenanigans with one-shots," said Barraga. "We're not dealing with the fundamental issue that we don't generate enough revenue through sales tax."
Gregory said there wasn't support among state or local lawmakers for a tax hike.
Among the $117 million in one-time revenue is $42.5 million in borrowing to cover pension costs, $32.8 million from a sewer reserve fund and $18.9 million from the sale of the John J. Foley nursing home in Yaphank.
Budget review director Robert Lipp said another one-shot -- $14.4 million from the tobacco settlement fund -- could be claimed by creditors.
He added, "There are problems in the budget, with or without" the tobacco settlement money.