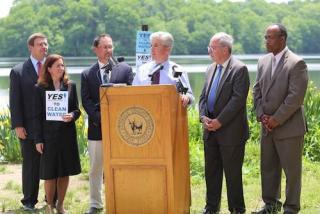 Suffolk lawmakers yesterday authorized a November referendum on a ballot proposal to create a $29.4 million program for environmental restoration and protection projects and land acquisitions aimed at protecting groundwater. The county would issue $29.4 million in serial bonds to establish the fund — the amount the county has already borrowed from the county's drinking water protection fund to balance its budget.

If approved by voters, the charter law would also authorize the county to borrow from the drinking water protection program's assessment stabilization reserve fund balance for the next three years to provide tax relief and keep the county tax levy increase within the state-mandated 2 percent cap. The assessment stabilization reserve fund currently has a balance of $140 million, according to officials. The county would be required to pay back all amounts borrowed by 2029, with payments beginning in 2018.

The $29.4 million program approved by the legislature yesterday represents the amount the county already borrowed from the drinking water protection fund, in 2011 and 2013, over environmentalists' objections.

The Pine Barrens Society and other environmental groups circulated petitions for a ballot proposition and then rallied in support of a deal struck with County Executive Steve Bellone to put a measure authorizing the restoration of the nearly $30 million to the drinking water protection program.

“This is a good faith effort on the part of the county executive and county legislature to right a wrong and begin the process of restoring drinking and surface water quality,

The resolution authorizing the referendum passed the legislature 14-4, with legislators Thomas Cilmi, John Kennedy, Rob Trotta and Kevin McCaffrey voting against it.

Trotta called the measure an example of "kicking the can down the road with a steel-tipped boot."

A companion resolution to require a referendum for any future amendment of the drinking water protection program was tabled by legislators yesterday.