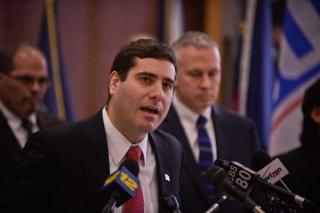 Bellone took over once the storm hit Monday. But Sini's appearance represented a high-profile opportunity to help ready the former federal prosecutor, 34, as a prime-time contender for county legislator this fall.

Democrats are looking to rebound from an embarrassing 2013 loss in the 14th Legislative District, where 23-year Lindenhurst Deputy Mayor Kevin McCaffrey won a huge upset in a nasty race. It was more painful because it's Bellone home district.

"It seems like they hired him just to run against me," McCaffrey, 60, leader of the GOP caucus, said of Sini. "But the feedback I'm getting from people is that they find it distasteful."

In the last two months, Sini, who makes $110,000 a year, was pictured running next to Bellone at a Wounded Warrior 5k race. He played a key role two weeks ago when Bellone announced a new anti-heroin initiative. Two days later, Sini as county spokesman announced a proposal that would require pawnbrokers get digital photo identification from sellers.

Sini, who grew up in West Islip and has lived in Babylon Village since 2011, worked five years for Manhattan U.S. Attorney Preet Bharara, who recently charged Assembly Speaker Sheldon Silver with corruption.

Deputy County Executive Jon Schneider said that "as a former assistant U.S. attorney who has prosecuted murders and drug cases his experience has been invaluable to the administration. He knows the criminal justice system."

"I told him the best way to learn the community is by experiencing it door to door and talking to residents," said Schaffer. Sini said he's knocked on 2,000 doors and brought about 185 issues to Schaffer -- from potholes and broken streetlights to speeding and reports of drug activity.

Schaffer acknowledged talking to Sini about running for the legislature. Schaffer labeled him a "very strong contender," but does not expect to make a decision until March. He said Bellone, who is also on the ballot, will help pull out a strong local vote for any Democrat in the district.

While new to politics, Sini said he believes he could win. "My law enforcement background puts me in a good position to help people in the district." Walking the district, he added, "gives me a great chance to figure out the concerns people have."

Anthony Pancella, Babylon Republican chairman said, Sini's effort "will fall flat" because he is largely unknown and he can't match McCaffrey's community ties. "I question hiring someone whose sole purpose seems to be showing up at press conferences," Pancella said.

Backers also say McCaffrey has an edge because the district has 15,919 Republicans voters to 14,719 Democrats, and that as president of Teamsters Local 707, he has strong union backing. McCaffrey said he has knocked on 500 doors and will reach 5,000 by Election Day.

Presiding Officer DuWayne Gregory (D-Amityville) said attacks against McCaffrey may have backfired in the first race, but said McCaffrey is making the same mistake. "With McCaffrey taking shots at Bellone at every chance, it creates a narrative that he is running against the county executive. That's a mistake when Bellone's support polls in the mid-70s."

McCaffrey called Bellone, a former Babylon supervisor, the "chief attack dog" in his last race. "I think people like that I'm not a rubber stamp," he said. He said Sini "is only accountable to the people who hired him a few months ago. He does their bidding, not the people's."