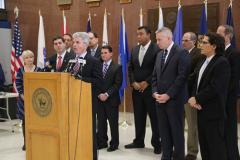 Suffolk County has announced new initiatives in an effort to combat heroin and opiate abuse on Long Island.

Aimed at providing residents with an alternative to combat heroin and other opiate abuse, the county unveiled partnerships to raise awareness and facilitate the use of the FDA-approved drug Vivitrol — an extended release form of naltrexone.

Sini told 1010 WINS the drug will give those hooked on heroin and opioids a fighting chance at recovery.
“It’s a monthly injection. So for that period of time it effectively prevents opioid relapses. It also decreases cravings to use opioids,” he said. “It also allows people to get the treatment and stay clean so that they have the mental clarity and stability and resolve to continue treatment.”

Sini said several service providers offer Vivitrol along with substance abuse counseling, but many residents don’t know about it. “…And it’s an opportunity for the county to make these people aware of this new tool and to point them in the right direction and to connect them with the providers that can help them,” he said.

“We know more about addiction, that cravings are just not cravings. It lights up certain parts of the brain and this particular drug will help in quelling some of those cravings,” Steve Chassman, with the Council on Alcoholism and Drug Dependency, said.

Suffolk will roll out an awareness program that targets users in the Suffolk County Drug Court system, the probation system, users who are saved by Narcan and those in county jails.
“A counseling and referral type of system,” Sini explained.

Additionally, Suffolk County has partnered with its largest school district, Sachem School District, in an effort to address substance abuse among teens and young adults.

The county saw more than 400 opioid-related deaths in 2012 and 2013 combined. The majority of which were due to heroin and oxycodone.