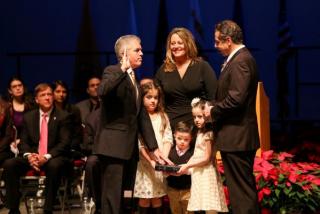 Suffolk County Executive Steve Bellone was sworn in for a second term Wednesday, promising to press for major redevelopment projects to make the county attractive to young people.
Bellone, with his wife Tracy next to him and their three small children with their hands on their family Bible, took the oath of office administered by Gov. Andrew M. Cuomo at Suffolk Community College’s Brentwood campus.

Sen. Charles Schumer (D-N.Y.), Rep. Steve Israel (D-Huntington) and State Comptroller Tom DiNapoli also spoke.
Bellone touted achievements of his first four years in office and promised to push for projects that spur economic growth.
“Four years ago we took over a government deeply divided and in many ways paralyzed, unable to resolve issues and move forward,” Bellone said in a 30-minute speech to about 400 people.

He noted that the county has reduced its workforce by 1,100 employees, privatized health clinics, is in the process of selling the John J. Foley nursing home in Yaphank, and merged the offices of the county treasurer and comptroller.
Bellone enters his second term following an easy electoral victory and with a strong Democratic majority in the county Legislature.
But he also alluded to recent turmoil in the county police department. Former top uniformed officer James Burke is in federal custody, facing charges he beat a Smithtown man and orchestrated a cover-up.
“For those questioning the status of the department you should know that we have put an outstanding leadership team in place,” he said, mentioning former federal prosecutor Tim Sini, a former aide and his nominee for police commissioner.
He said he would “not tolerate abuse of power from any level of government” but warned critics not to try to take political advantage to “tarnish” the entire department.

Cuomo praised Bellone for keeping property taxes under the two percent state cap and for backing projects such as Wyandanch Rising.

Cuomo also recalled working with Bellone during natural disasters, including Superstorm Sandy in 2012. “When I looked into his eyes, I saw intelligence, I saw integrity, I saw courage and I saw a leader,” Cuomo said of Bellone.
Bellone called efforts to keep and attract young people to Suffolk “the great work of our time and what we must be judged by.”
He vowed to “push forward projects,” including a transportation network to connect academic and economic centers such as Stony Brook University, Brookhaven National Laboratory and Cold Spring Laboratory with local downtowns.
About 60 Suffolk deputy sheriffs appeared at the ceremony to protest the lack of a union contract for the past six years.

Members of the Deputy Sheriff Police Benevolent Association hollered at Bellone, calling him a “criminal” and “corrupt” as he and his family walked in.
Bellone ignored the group. County spokesman Justin Meyers said “we’ll not be bullied into making a bad deal for taxpayers.”