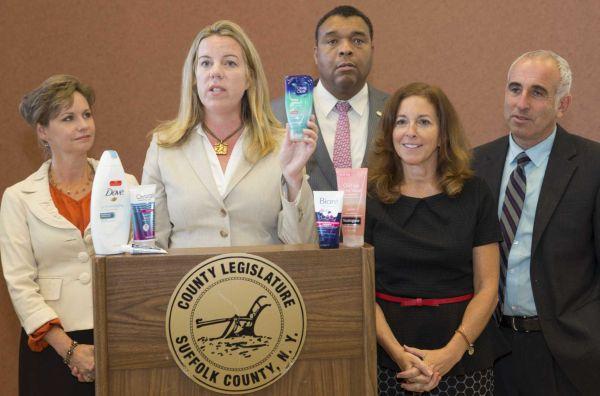 County Executive Steve Bellone signed a ban on microbeads in personal care products into law yesterday, making Suffolk the third county in New York to put a prohibition in place.

The tiny plastic beads found in soaps, facial scrubs and some toothpastes can get through wastewater treatment filters, dumped into bays and the Long Island Sound and join the food chain where they're ingested by fish and mollusks, Bellone said.

"This is another step to make waterways cleaner," Bellone said at a bill signing at the H. Lee Dennison building in Hauppauge. He was joined by lawmakers and environmental advocates who have pushed for the bill.

States such as Connecticut and California have banned the beads. As more counties in New York institute bans, pressure will be put on state lawmakers to enact a statewide law, said Adrienne Esposito, executive director of Citizens Campaign for the Environment. A similar state law failed this year in Albany.

The plastic beads, which have been found to contain high amounts of toxins, are being replaced by natural products such as ground apricot pits and walnut shells by companies.

Legis. Sarah Anker (D-Mount Sinai) said Suffolk has a long history of being at the forefront of environmental and health issues.

"Once again, Suffolk takes the lead while we wait for the state and federal government to catch up," she said.

The legislation will go into effect in January 2018.