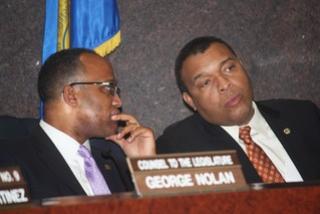 The Suffolk County Legislature voted on Tuesday night to raise the legal age to purchase tobacco products from 19 to 21, effective Jan. 1 next year.

The legislation, sponsored by Legislator William "Doc" Spencer (D-Centerport), was approved by a vote of 10-8, with mostly Democrats in the Democrat-controlled Legislature voting in favor of the bill, and all of the Legislature's Republicans voting against the measure.

The bill applies to tobacco products including cigarettes, chewing tobacco and e-cigarettes.

Legislators DuWayne Gregory and William "Doc" Spencer confer with one another during the meeting Tuesday night. Photo by Rohma Abbas
The legislation awaits Suffolk County Executive Steve Bellone's signature, which he is expected to do, according to a spokeswoman on Wednesday.

When reached on Wednesday, Spencer said he was "very, very pleased" with the vote. He has championed the legislation, saying that raising the purchasing age would prevent addiction in young people and would greatly reduce future health care costs.

"The significance of it is that it continues with the trend that we are realizing — the menace to society that smoking has become," Spencer said of the vote. "It shows I think a progressive development of our democracy, where we're now starting to be able to take some of these common senses issues and get through politics, get through the social agendas … and we're starting to make decisions based on, I think, fair science."

Each day, more than 3,800 people under the age of 18 smoke their first cigarette and more than 1,000 youth under 18 become daily cigarette smokers, according to a message from U.S. Secretary of Health and Human Services Kathleen Sebelius in a 2012 surgeon general's report, "Preventing Tobacco Use Among Youth and Young Adults."

"Despite the well-known health risks, youth and adult smoking rates that had been dropping for many years have stalled," Sebelius wrote.

Spencer's law has had its fair share of critics and supporters at several public hearings at the county. While many support the potential health benefits of the legislation, some argued against it because of the economic impact it would have on businesses and the county in terms of sales tax, driving consumers to the black market or to Nassau County to buy cigarettes.

Others said the legislation isn't fair and consistent with other societal standards — noting that individuals could go to war for their country at 18 but they wouldn't be able to buy a pack of cigarettes.

On a personal standpoint, Legislator John Kennedy, Jr. (R-Nesconset) echoed those sentiments in a phone interview on Wednesday. But he said he voted against the law because he feels the county "really has no enforcement powers" on the measure.

"I view it as being disingenuous [to the] public to actually support a measure like this that gives them the impression there's some major victory in regulating sale of these products when in fact nothing will be accomplished by it at all," he said.

Still, if that is the "general will" of the public, Kennedy said it needs to be a law in effect across the state. He said he plans to pen a letter to New York State Assembly Speaker Sheldon Silver and New York State Senate Majority Coalition Leader Dean Skelos asking the state to consider raising the legal age to purchase tobacco products to 21, in the hopes that the state would have the resources to enforce the measure. He said the Legislature's Republican caucus would sign off on the measure, and he's planning to invite the county's Democratic caucus to do the same.

In a related measure, Legislator Rob Trotta (R-Fort Salonga) sponsored legislation at Tuesday's meeting directing the county's attorney to look into legal action against cigarette manufacturers to recover money potentially owed to the county through illegal cigarette sales. The legislation was approved, according to a spokeswoman for Trotta.

Cigarettes sold illegally to the general public on Native American reservations and on the black market are not subject to the 1998 Tobacco Master Settlement Agreement between state and major tobacco companies that require them "to make annual payments to the states to compensate them for some of the medical costs incurred for treating people with smoking related illnesses," according to a statement from Trotta.

"While assigned to the FBI Violent Crime Task Force, I helped get millions of dollars of bootleg cigarettes off the street that were not being taxed and were resold on the black market," Trotta said in the statement. "Now I want to take it to the next level by holding the cigarette manufacturers accountable for their role in the distribution and to recover monies Suffolk County should have received under the Tobacco Master Settlement Agreement."