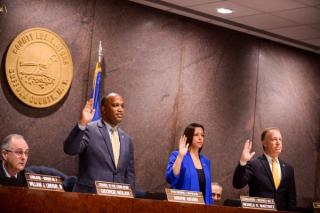 The Suffolk County Legislature adopted a new rule Monday that will make it easier for East End residents to make their case to legislative committees several times a year without having to travel to Hauppauge.
The new rule was put into effect during the legislature’s annual organizational meeting.

The new rule, adopted after three years of lobbying by Legis. Al Krupski (D-Cutchogue), will require county lawmakers twice this year to hold their week of committee meetings at the Riverhead County Center. The committees determine the proposed resolutions and local laws that will go before the full legislature for final votes.
Krupski said he and newly elected Legis. Bridget Fleming (D-Southampton), who replaces Schneiderman, are discussing the committee meetings that will be held on the East End. Currently, six general legislature meetings are scheduled to be held in Riverhead. Until now, all committee meetings have been held in Hauppauge, forcing East End residents to make the drive.
“Government works best when the voters can keep their eyes on us,” Krupski said of the changes.
The legislature also voted 15-3 Monday to make the Suffolk County News, a Republican publication, and Smithtown News, a Democratic publication, the county’s two official newspapers, where legal notices by state law must be run.
Democrats William Lindsay III, of Oakdale, Sarah Anker, of Mt. Sinai, and Monica Martinez, of Brentwood, voted against the measure. They argued that the $500,000 annual cost is unnecessary because the material can be posted electronically online.