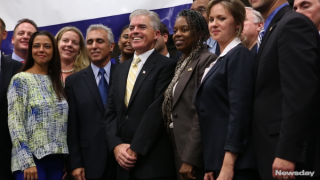 "Tonight the people of Suffolk County delivered a mandate," Bellone said in declaring victory. He thanked O'Connor and then said, "Now that this campaign is over, now is the time for us to come together and do the people's business."

Tuesday, Bellone had crisscrossed competitive legislative districts in Patchogue, Babylon, Bohemia and the north shore of Brookhaven for the Democratic legislative candidates, his campaign manager Keith Davies said. Democrats are in a battle with Republicans to preserve a 12-6 supermajority at the legislature.

O'Connor had joined Republicans at the Portuguese American Center in Farmingville last night with his wife, Dr. Maureen Corry, and their daughter, Meghan, 13, after spending most of Election Day with them. Earlier Tuesday, he had voted at the Great River Fire Department.

O'Connor had made a brief run for Nassau County executive in 2001. He moved to Suffolk in 2004.

Bellone had said the county has made progress with its budget since he came into office four years ago, cutting the county's structural deficit in half while keeping property tax increases under the state's tax cap.

He has mostly calmed relationships with the county legislature, while fighting for cost-saving measures such as closing the John J. Foley nursing home, privatizing health care centers and combining the treasurer's and comptroller's offices. Bellone also had touted $383 million secured from the state and federal government for sewers.

"He has been an elected official in Suffolk County for 20 years, and voters know him as a man of his word," said Bellone spokesman Justin Meyers.

Other elected Republicans balked at running for county executive against Bellone, who a year ago had been sitting on a $2 million campaign war chest with a well-organized Suffolk County Democratic Committee and politically influential police unions firmly in his corner.

It wasn't until May that GOP chairman John Jay LaValle and the county committee picked O'Connor.

Bellone, meanwhile, had $1.8 million in his campaign account 11 days before the election, the last report available. He had spent more than a million dollars this year on his re-election bid.

With Rick Brand and Sarah Armaghan