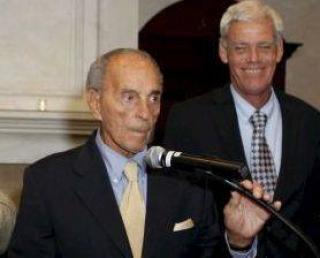 In the memo sent Wednesday, Vecchio attached a description of secretarial duties, such as typing confidential letters, maintaining confidential files and monitoring emails.

"It seems to me that you are either not comprehending why the position exists, you have a disregard for civil service law or you are mocking the Town Board and the public," Vecchio wrote.

Jorgensen said in an interview Thursday that he has sent his personal secretaries and clerical workers to job sites because it is important for them to see procedures in order to do their jobs. Jorgensen hired Kaitlin Swinson as his new secretary on Jan. 26, according to personnel officials.

"I get 100 phone calls a day at my office because I pave roads, I mill roads, I pick up brush, I pick up leaf bags, I sweep roads, I fill potholes," he said. "My secretary gets many, many calls about what's going on on the streets, and it's better that she sees what's going on so she can respond to the residents that call on the procedures that we do."

The memo comes as Jorgensen and the town face a notice of claim filed in December by Jorgensen's former secretary, Aimee-Lynn Smith, 27, who alleged that Jorgensen, 63, sexually harassed her, took her to job sites and out to eat, and ultimately fired her after learning she was dating a highway department worker.

Smith, who lives in Shirley, has an Equal Employment Opportunity Commission mediation with the town scheduled on Tuesday.

Jorgensen is due in First District Court, also on Tuesday, after pleading not guilty April 1 to four felonies and a misdemeanor charge brought by the Suffolk County district attorney's office for allegedly directing a town highway worker to falsify documents related to a paving project and submitting them to the town.

In an interview Thursday, Vecchio said Jorgensen should step down due to the recent legal cases and reports by witnesses that he engaged "in the same conduct" that led to the filing of Smith's claim.

Swinson, of West Babylon, could not be reached for comment Thursday.

When asked about Vecchio's call for his resignation, Jorgensen said only, "I am an elected official."

Swinson was terminated in February, after board members voted unanimously, 5-0, to rescind nearly $38,000 allocated for the position.

Swinson was rehired in March after board members voted 3-1 to restore funding for the position.

Councilman Robert Creighton said he voted to restore funding because he thought the personal secretary position was important "if it is properly conducted." If facts confirm Vecchio's findings, Creighton said he would be "very, very disappointed in Mr. Jorgensen, and it certainly would affect any decision that I make in the future regarding the position."