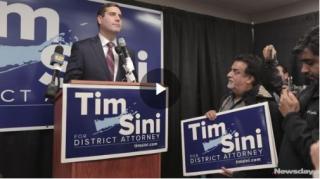 “Together we have ushered in a new era of criminal justice in Suffolk County, an era of integrity, fairness and doing the right thing,” Sini told nearly 200 supporters at his campaign headquarters in Hauppauge. “We are going to return the office to the honorable institution it once was.”

Sini campaigned as a reformer, pointing to his experience as Suffolk police commissioner and 4 1⁄2 years as a former assistant U.S. Attorney for the Southern District. He had promised to make sweeping changes to a district attorney’s office that had been run for 16 years by Democrat Thomas Spota, who was indicted in October on charges of interfering with a federal investigation.

Sini said the office is in “turmoil” and promised to bring in a transition team to assess the office.

Perini said Tuesday said he was disappointed but thanked the volunteers he worked with. He also said he called to concede, but Sini wasn’t there to pick up the call. “I really hope he’s up to the task, because the county needs a good prosecutor,” Perini said.

The race for sheriff was too close to call Tuesday night and campaigns said it would come down to 13,554 absentee ballots left to be counted. Democrat Errol Toulon, a former New York City deputy corrections commissioner held a 1,354-vote lead over Republican Larry Zacarese, an assistant police chief at Stony Brook University, with all precincts reporting on Tuesday night.

Toulon said, “I’m feeling really good considering I’ve only been in the race for five weeks. It seems like quite a few people feel I should be the sheriff.”

“This is far from over,” Zacarese told a Republican crowd at the watch party in Patchogue. Suffolk Sheriff Vincent DeMarco did not seek re-election.

Sini will take over an office under a cloud. Federal prosecutors last month charged Spota and his top anti-corruption prosecutor Christopher McPartland with involvement in a cover-up of former Suffolk Police Chief James Burke’s assault of a suspect in 2012. Spota, a Democrat first elected in 2001, and McPartland have pleaded not guilty, and Spota has said he will resign before his term is up.

Democratic chairman Rich Schaffer, who was at a separate Democratic campaign event in Hauppauge, said, “At the end of the night, there are going to be several factors that drove turnout: the constitutional convention, and anti- and pro-Trump sentiment. Both camps are crystallized.”

On Tuesday, Sini, 37, of Babylon, started campaigning at the Babylon train station at 5:30 a.m., launched volunteers from his Hauppauge campaign headquarters and then made calls to voters, according to his campaign.

Perini, 70, of Huntington, said that after voting Tuesday morning he made campaign calls, did a television interview and then went home to play with his grandchildren visiting from Ohio.

The two ran a heated campaign, with each accusing the other of being tied to political figures, although Sini tripled Perini’s fundraising.

Sini, whose campaign raised a county-record $1.25 million, ran television commercials in the final weeks that cited a 1989 State Investigation Commission report that found Perini “irresponsible and grossly unprofessional” in condoning illegal wiretaps and other abuses. Perini said the findings were based on false testimony of a rogue cop.

Perini, who raised $372,000, attacked Sini for exaggerating his accomplishments as a federal prosecutor and police commissioner.

Sini’s victory capped a meteoric rise in Suffolk politics. Two years ago, as a midlevel aide to Bellone, he lost a race for county legislature. But soon after Bellone nominated Sini to be the department’s new commissioner in the wake of Burke’s resignation.

Sini worked as an attorney for corporate law firms in Manhattan and clerked for two federal judges before getting a federal prosecutor’s job in Manhattan in March 2010.