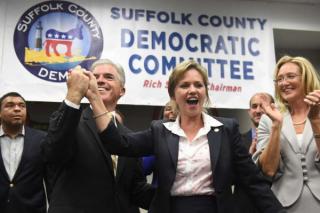 Suffolk Legis. Sarah Anker (D-Mount Sinai) turned an unofficial one vote election night lead into a 17-vote victory Thursday when all the votes were finally counted at the board of elections in Yaphank.
"We can now breathe," said Richard Schaffer, Suffolk Democratic chairman. "In every election the Republicans have always underestimated her and in every election Sarah and the voters prove them wrong."
Anker, who first won a special election four years ago, will enter her third full two-year term.

GOP officials acknowledged Wednesday that Republican challenger Steve Tricarico was a "statistical long shot" after lawyers for both sides agreed to the tally of all but 15 of 57 challenged ballots. GOP officials and Tricarico did not return calls for comment Thursday night.
"I'm a political anomaly, winning in such a heavily Republican district as a Democrat," Anker said. Republican voters outnumber Democrats in the Sixth District 18,933 to 15,122.
"Now, I can get back to my job, which is to help constituents," Anker said.