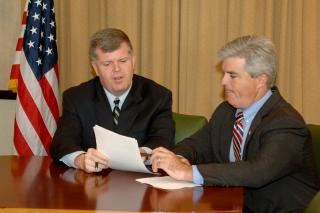 Town of Babylon Supervisor Rich Schaffer has announced the kickoff of his reelection campaign, promising to continue the Democratic policies that have kept Babylon moving in the right direction. Schaffer’s commitment to keeping taxes low, making strategic investments to the town’s infrastructure and keeping Babylon business-friendly are the cornerstones of his campaign and will ensure that Babylon remains a great place to live, work and play.

Schaffer was appointed by the Babylon Town Board in January of 2012, after previously serving from 1992 to 2001. His return to the position of Supervisor came as a result of a vacant seat left by his protégé Steve Bellone, who served from 2002 to 2011, after he was elected to the office Suffolk County Executive in 2011.

“It has truly been an honor to get the opportunity to serve the residents of the Town of Babylon once again,” Schaffer said. “I look forward to continuing the policies of Steve Bellone and maintaining an efficient and productive town government.”