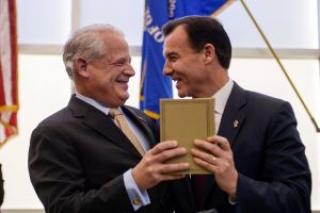 Two days before he formally leaves office, retiring Rep. Steve Israel on Sunday symbolically turned over his 3rd Congressional District seat to his successor, Thomas Suozzi, in a “passing of the baton” ceremony at Glen Cove City Hall.

Hundreds jammed the City Council chambers and spilled into adjoining hallways, including a slew of Long Island mayors, town officials, state and county legislators and others who will depend on Suozzi to bring federal money to local projects.

Suozzi, a former Glen Cove mayor and Nassau County executive, will be sworn in Tuesday in Washington. He called Israel (D-Huntington) “a true model for one to follow,” saying that even though he had held a top Democratic leadership post and gained an expertise in foreign affairs, he had still paid close attention to the needs of district residents.

Israel urged onlookers to remember a well-known quote from the late U.S. senator and vice president, Hubert H. Humphrey, who said the “moral test of government” is how it treats children, the elderly “and those who are in the shadows of life — the sick, the needy and the handicapped.”

He added: “I believe that moral test may be challenged like never before in Washington, D.C.,” an apparent allusion to the incoming administration of Donald Trump and the GOP-controlled Congress. “Tom Suozzi will make sure that this government passes that moral test of government every single day.”

The two men hugged and shook hands as Israel handed Suozzi not a baton, but a thick, worn hardcover copy of the U.S. Constitution and the rules of the House of Representatives.

Suozzi’s voice cracked as he began talking about his father, Joseph Suozzi, a former Glen Cove mayor and city court, state Supreme Court and appellate court judge who died at age 95 on Oct. 16, less than a month before his son was elected to Congress.

“I know my father’s looking down on us,” he said. “And the values I have and the values that many of us have are from his example of ‘always do the right thing no matter the situation.’ ”