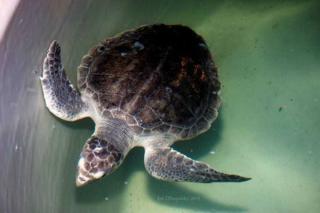 Legislation introduced in Albany would protect marine mammals and sea turtles like this one shown at the Riverhead Foundation for Marine Research and Preservation on Aug. 19, 2015. (Credit: Riverhead Foundation for Marine Research and Preservation)
Three Long Island lawmakers have introduced a bill that would create a marine mammal and sea turtle protection zone around Plum Island and two other environmentally sensitive eastern Islands, but a fishing group wants assurances it won’t limit fishing.

Englebright said the bill is “really trying to make sure that if the island is sold, and we understand the federal government is pushing hard to make that happen, that we have a clear understanding of just how ecologically significant these areas are.”

Bonnie Brady, executive director of the Long Island Commercial Fishing Association, expressed frustration that the group wasn’t consulted about the legislation and said she’d like the bill to include language clarifying that fishing won’t be restricted. The bill is expected to get a full vote in the legislature as early as next week.

Brady said she received a call Monday from Englebright assuring her the bill won’t restrict fishing. But, she added, “there’s no mention in the bill that commercial, recreational and charter fishing will be allowed in those areas in perpetuity.”

Englebright said the bill doesn’t restrict fishing activities. “If somebody wants to fish they’re welcome to do that,” he said.

The bill, first suggested by a group called the Preserve Plum Island Coalition, assumes a future sale of the island and a desire to codify protections.

“The fishing community was very much in our mind, which is why this is not a marine reserve,” Englebright said. The bill is “very limited. It’s just 1,500 linear feet off shore of just three islands, and it’s only a protection area for marine turtles and marine mammals. It protects them from being harassed. It doesn’t speak to fishing or restrict fishing in any way.”

Thiele said the bill was “not designed to give the DEC a back door to limit fishing,” but said if fishing groups wanted the bill to include language to make that clear, he would consider it.