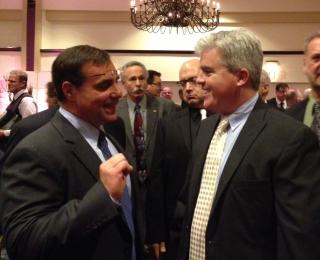 ISLIP TOWN—Up until five or six years ago, West Islip resident Gerry Pallotta was registered as an Independent voter until he began seeing what he perceived as positive changes being made in the town by Islip’s Democratic supervisor at the time, Phil Nolan. That progress provided some of the impetus for him to change parties. And now he’s guiding Islip’s Democrats to what he said is a rebuilding process that would not only lead to victory, but good government as well.

“There are no north, south [east and west] areas of the town,” he said. “Everyone should have a voice. It’s who we are. I want to see involvement from all corners, a rainbow of involvement where the [candidates] are on the right side of the issues.”

Pallotta, who is a businessman, has served as a Democratic committeeman and also on Supervisor Nolan’s Infrastructure Committee that examined the needs of the town’s parks and grounds. “I was very impressed. [Phil] was doing a good job,” he noted.
However, after just five years, the Islip Board reverted from a Democratic majority back to a Republican stronghold, which had been a 60-year trend in the town.

“The other side was effective in getting the message out, more effective than we were,” he said, regarding the 2011 election. “We won’t let that happen again. One of our major goals is to win back the town.” Pallotta said he’d begin by focusing on the two council seats that are up for re-election in 2013.

“It’s important to have a balance in government. Right now, the five-member board is missing those checks and balances,” he said.

The Democratic leader said his mission has been made easier by some of the recent decisions made by the current administration, which include: cuts to programs and services as well as a tax increase that far exceeds the state imposed tax cap and contradicts the platform the board ran on, which was cutting taxes.

“That shakes the trust of the taxpayers,” Pallotta noted. “The members of the town board also campaigned on transparency yet this budget process has been anything but that,” he said, noting that the town has not been responsive to FOIL [Freedom of Information Law] requests. “The taxpayers deserve to know the details and how it would impact them. We’ll be doing our own review,” he added.

Pallotta also said the abolishment of some town programs such as Human Services did not have the best interests of residents in mind.

“I question whether or not the current town board understands the role and mission of town government. Local government touches people on a more personal basis,” he said.

Pallotta said he’s looking forward with great enthusiasm to the coming years where fulfilling his party’s mission would never be about smears, but rather a strong focus of being on the right side of the issues.

“I have faith in the residents of Islip that they will know the truth when they see it. “Islip is winnable by either party if you can win the argument on the merits of the issues.” And maintaining virtue is something of which he remains very passionate.

“I believe that people are at their best when they’re passionate about what they’d like to accomplish. And that’s important,” he said. “My [ultimate] vision for Islip is exemplary government that will [do the right thing] for the people.”