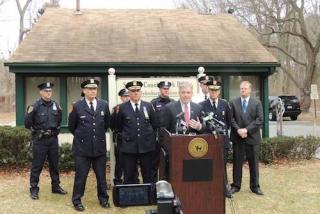 Suffolk County Executive Steve Bellone plans to use a staff of 40 to 45 seasonal park rangers and security guards to maintain order in county parks during the peak summer season. He held a press conference yesterday to call on state legislators to amend Civil Service law to allow the transfer.

Bellone says replacing the parks police with part-time rangers and security guards, who will be paid $13 to $17 per hour without benefits, will save the county $13.4 million in police costs and provide better coverage and increased security in the county's 29 public parks, 11 campgrounds, two marinas and four golf courses.

The county currently employs 29 officers, five sergeants and one lieutenant in the parks police force, in addition to five part-time rangers.

Walter said the measure would shift responsibility for patrolling the 275-acre Indian Island Park and campgrounds to Riverhead Town Police, at a significant cost to town taxpayers.

The supervisor went to Hauppauge Tuesday afternoon to voice his opposition to the resolution, but couldn't stay long enough to have an opportunity to speak — the legislature opened its proceedings with an hour's worth of proclamations and ceremonies, and there was a town board meeting in Riverhead he had to get back to, Walter said.

Walter said there are too many unanswered questions about how the county parks will be policed and what it will cost the five East End towns, which maintain their own police departments. He criticized the East End's two legislators, Al Krupski and Jay Schneiderman, for supporting the measure.

The supervisor, who serves as police commissioner, said he learned of the plan Monday afternoon from Legis. Kennedy, who voiced concerns about the plan in an interview Monday evening.

Walter says he believes public safety at county parks and campgrounds will be compromised.

A spokesperson for the county executive said in an interview yesterday that public safety will be improved because there will be more park rangers and security guards stationed at county parks and campgrounds during the peak season than there are currently park police.

There are currently three patrol units assigned to Indian Island County Park in Riverhead during the peak season, according to Bellone spokesperson Vanessa Baird-Streeter.

Baird-Streeter said there will be a greater number of park rangers and security guards assigned to the park during the summer months under the new plan. She could not say how many.

"It is not determined whether the rangers would be armed or not," Baird-Streeter said. The rangers will have peace officer status, which under state law allows them to carry firearms if they are authorized and trained by the municipality.

"A lot of times, park rangers are retired law enforcement, so they already have that training," Baird-Streeter said.

The Riverhead supervisor, who as supervisor sits as a member of the state Pine Barrens Commission, said it was brought to his attention at yesterday's commission meeting that the commission has relied on the county park police for law enforcement in the Pine Barrens.

"I'm not sure what they're thinking," the supervisor said.