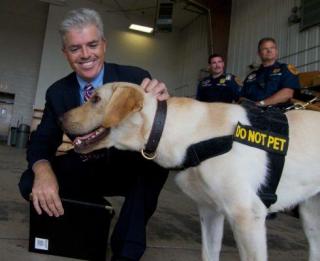 The Suffolk County Police Department has acquired a sophisticated and state-of-the-art new tool in counterterrorism: the powerful nose of a yellow Labrador retriever named Unser.

The department announced yesterday that Unser, a 2-year-old pooch trained in "Vapor Wake" detection of bomb chemicals, is one of the newest recruits to the force and is assigned to patrol Long Island MacArthur Airport in Ronkonkoma.

Unser has been training since puppyhood at the College of Veterinary Medicine at Auburn University in Alabama, where dogs are "scientifically bred, selected and developed to detect the scent trail an explosive leaves in the air. By their side is a handler educated in research-based techniques to provide a complete security system," according to the program's website.

While police officials declined to specify what substances Unser can smell, Suffolk Chief of Patrol John Meehan said Unser's nose is more sensitive than any mechanical device and he can detect 10 odors, adding another component to security at the airport.

"Everyone at the airport and who comes to the airport should feel more comfortable and safe knowing that this K-9 officer is on patrol," said Suffolk County Executive Steve Bellone at a news conference Tuesday at the Suffolk police special patrol facility in Ronkonkoma.

Unlike ordinary bomb-sniffing dogs, Unser can smell explosives on moving targets or people and can follow the odors back to the source, according to his handler, Officer Michael Canavaciol.

The Suffolk police department received a $60,000 grant from New York State Homeland Security and Emergency Services to buy Unser and train Canavaciol to work with him. The NYPD, Amtrak police, the U.S. Capitol Police and the Federal Protective Service also use "Vapor Wake" dogs trained at Auburn.