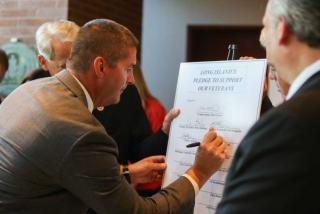 The attendees are "all here today to sign a veterans hiring pledge that commits us to support our veterans not with a bumper sticker but with a paycheck," Israel (D-Huntington) said.

The initiative includes plans to develop a website that will make information about job openings in Nassau and Suffolk counties more available to vets.

For New York veterans, unemployment was 8.2 percent in 2013, higher than the national average of 6.6 percent that same year, according to the U.S. Department of Labor. New York data for 2014 have not been released.

One challenge for job-seeking vets is translating the versatility of their skills to employers, said Andrew Roberts, director of the Office of Military and Veterans Liaison Services for North Shore-Long Island Jewish Health System, the Island's largest private employer and one of the signers of the pledge.

"There is a lack of understanding of what the military is about," said Roberts, an Army veteran who served in Iraq. "In general, people don't understand the skill sets."

For Kings Park-based Dejana Truck & Utility Equipment Inc., which wasn't at the pledge signing, the hiring of veterans has become a priority since November, when it focused on hiring returning soldiers.

"I'm glad the companies are stepping forward and realizing what someone stepping out of the military can bring to a company," said Fred Perrin, recruiting manager for Dejana.