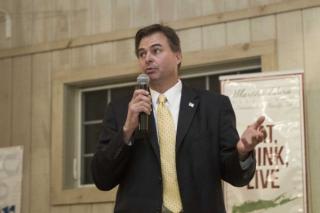 The Democratic Southold town board member -- a fourth-generation farmer -- is seeking to represent the legislature's 1st District, which is Suffolk's largest, stretching from Fishers Island to Center Moriches. A special election will be held Tuesday, two months after former Republican Legis. Edward Romaine was elected Brookhaven Town supervisor.

"I know the issues are different in Huntington than in Orient, but you build relationships and work with people," Krupski said. "I'm also interested in what the issues are in Huntington, so I'm not just going to be yelling for my share. I understand that it's a big county."

Krupski, 52, was raised in Cutchogue, where he still lives and runs a pumpkin farm. He touts his understanding of the agricultural, water quality and land preservation issues on the North Fork. He was elected to Southold's town board in 2006, after serving for two decades as a town trustee, an elected position that deals with environmental permitting.

Krupski said that if elected to the legislature he'll lobby the state to let towns manage deer and wild geese control programs, and to allow them to dredge later into the winter, which he said is critical to improving water quality.

The 1st Legislative District is known as the county's rural center -- and Krupski said his experience as a farmer would ensure he looks out for the industry's health. The district has 61,789 registered voters, including 16,295 Democrats, 22,946 Republicans and 16,751 with no party affiliation.

"Suffolk is the largest agricultural producing county in New York. Everyone here knows how important the industry is -- not just [as] heritage, but economically," he said.

Krupski said he has the political experience to work not only with the county legislature's 10 Democrats, but also with its five Republicans and two minor party members. For the past year, he's served on Southold's board as deputy supervisor, chosen by Republican Supervisor Scott Russell.

"You don't work for a party," Krupski said. "You listen to everybody."

Russell declined to comment on Krupski, saying, "I look forward to working with whoever is successful."

Republicans have endorsed Riverhead Town Supervisor Sean Walter for the 1st District seat. Walter argues Krupski's first loyalty will be to Suffolk Democrats, whose power base is in Babylon. Suffolk Democratic chairman Richard Schaffer, who supported Krupski with $50,000 from the county committee, dismissed the notion.

"I think the Republicans in Southold have answered that," Schaffer said. "That they appointed him deputy supervisor speaks volumes about his ability to work across party lines."