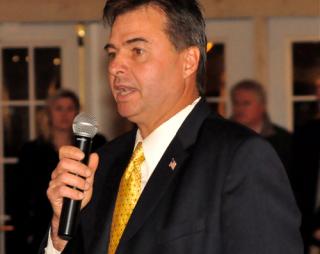 Suffolk County Legislator Al Krupski has a new target in the ongoing fight to protect the area’s waters: county parks.

The legislator has sponsored legislation that would require the county to consider installing alternative wastewater treatment methods in parks when the existing septic systems fail or when they require upgrades. Mr. Krupski sees such a policy as a small — but necessary — step toward more widespread reductions in pollution.

“Percentagewise, I’m sure [county park waste] is small compared to 360,000 residential systems,” he said. “[But] when a system fails, we need to spend money anyway, so this is a different way of addressing the maintenance … You might as well fix it the right way.”

Last Wednesday, the county Legislature’s parks and recreation committee approved the proposed resolution. Mr. Krupski said it will likely go before the full Legislature for a vote at the Dec. 1 meeting.

Mr. Krupski hopes the county can be a “leader” in addressing local water quality, something he lists as his top legislative priority on his website. He also hopes his proposal can catalyze officials and residents into addressing wastewater treatment.

“This only requires [alternative systems] as they fail,” he said. “It doesn’t preclude us from going in and being proactive.”

He said he was motivated by the county’s decision in the summer to install an alternative wastewater treatment system at Meschutt Beach in Hampton Bays once its traditional system failed.

“Instead of patching it up or going with a new conventional system, which would have cost a lot of money, the county decided to go with an advanced treatment,” he said. “That’s where the idea came from: Why not do it the right way at other county parks?”

The county is currently operating pilot programs for six different alternative treatment methods, so Mr. Krupski said officials would decide which system to use for a given park on a case-by-case basis since “every scenario’s going to be different.”

Priority is given, too, to parks more closely connected to wetlands or shorelines — perhaps Indian Island County Park in Riverhead or Smiths Point County Park in Shirley — since their septic systems are more likely to affect local waters.

“If we’re certain there’s a great deal of [wastewater] flow right into the service waters, [an advanced treatment system] is a great positive change there,” he said. “If you have a small, seasonal flow, you have to analyze the cost involved compared to the benefits received.”

Mr. Krupski said these new requirements would not put excessive financial burden on the county. Since it only targets systems that have already failed, the spending would fall under budgeted maintenance of existing infrastructure.