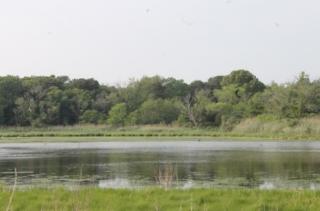 The process will be set in motion next week to acquire the 95-acre former duck farm in Riverhead valued by environmentalists one of the most important properties for preservation in the Peconic Estuary, County Legislator Al Krupski said today.

The former Celic duck farm site known as Broad Cove, situated on Terry Creek and Meetinghouse Creek, will be the subject of a procedural motion at the county legislature Tuesday, authorizing the county to make an offer to buy the site for preservation, Krupski said.

Riverhead Town in 1975 issued a prior landowner permits to build 500 condominium units and boat slips on the site. The permits were invalidated by a state court in the early 1990s in a lawsuit brought by the North Fork Environmental Council.

The site, adjacent to Indian Island County Park, remains zoned “Tourism/Resort Campus,” a zoning use district that allows a variety of intense uses, either as-of-right or by special permit of the town board, including: hotels, spas, bed and breakfasts, country inns, country clubs, recreational clubs and docking facilities.

“A procedural motion is going in on Tuesday to authorize the county to make the offer to buy Broad Cove,” Krupski said today. “I’ve been trying to get the pieces in place for a year,” he said. “We just didn’t have the money to make the offer.”

That changed when offers on two other properties were not accepted, freeing up enough funds to allow the county to make an offer to the property owner.

“We can only hope and pray the owner can come to terms with the county and preserve this beautiful piece of property,” Krupski said. “It takes two to tango.”

The site is owned by Stanley Weiss of Smithtown, who has submitted a letter to the county indicating he is willing to discuss selling the land for preservation.

The county agreed to pay $8.5 million for the property in 1999, according to the N.Y. Times. Prospects for public acquisition fell apart in 2000, when the owners announced a contract with a private buyer after 14 months of negotiations with the county didn’t produce results. The collapse of the deal drew fire from environmental advocates, who attacked the county for failing to make the purchase. L.I. Pine Barrens Society executive director Richard Amper told the Times the county “botched” the acquisition, but then-county executive Robert Gaffney said their were unresolved land title issues that the seller wasn’t willing to address.