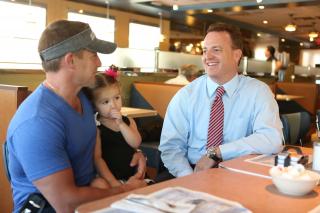 The Suffolk County Independence Party announced that it is endorsing Democratic candidate Bill Lindsay III in his bid to replace his father's seat as the Suffolk County Legislator for the 8th District.

The party announced its endorsement in a statement after it said it vetted both Lindsay and Anthony Musumeci, Lindsay's Republican opponent in the election. As a result of the endorsement, Lindsay III will be running on the Democratic and Independence ticket when voters step into the booth in November.
Frank MacKay, chairman of the Suffolk County Independence Party cited the Holbrook native's pro-business positions as the reason for giving Lindsay the nod.

“Bill Lindsay III’s experience in the private sector gives him the unique ability to help continue to improve the business environment in our community and makes him the right candidate," MacKay stated in the release. "This is going to be a tough race, but the Independence Party is confident that Bill will continue his father’s legacy of service to the community, while also bringing in new ideas to grow our local economy.”

Lindsay III is running on an anti-bureaucracy, pro-small business and maintaining the line on property taxes platform.

If elected, Lindsay III would fill his father, William J. Lindsay's position in the legislature, which Lindsay must vacate due to term limits. The 8th Legislative District encompasses parts of Ronkonkoma as well as Holbrook, Patchogue, Bayport, Blue-Point and Sayville.

In a report published by Newsday on Tuesday, Lindsay has thus far out-fundraised Musumeci to the tune of $82,000 to $17,000. Lindsay III also has the support of labor groups that have long backed his father, according to the article.

“It is clear that independent voters in the 8th Legislative District are confident that I am the right candidate to cut government red tape so that our small businesses can continue to grow, improve our quality of life, and hold the line on property taxes," Lindsay stated. “I am extremely grateful for the support of Frank and the Independence Party and I am honored to have my name appear on their ballot line this November.”