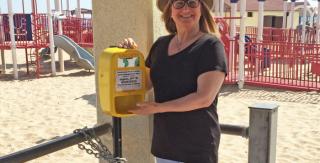 Last summer Berland launched a free sunscreen dispenser program at Crab Meadow Beach after working in conjunction with IMPACT Melanoma, formerly known as the Melanoma Foundation of New England, an organization that provides education, prevention and support for the most serious form of skin cancer.

“The [Crab Meadow Beach dispenser] was a success,” Berland said in a phone interview. “It got a lot of use last year and this year. So I wanted to expand it to 14 other locations.”

For about $1,600, the town will purchase from IMPACT Melanoma 14 additional BrightGuard sunscreen dispensers along with a supply of BrightGuard Eco Sport Sunscreen Lotion SPF 30 for each designated location.

“For example the town pool is where all town camp programs are held,” she said. “I’m willing to bet there are some kids who are not using sunscreen or will forget it and this can help.”

Berland said the reaction to the first dispenser and a melanoma prevention and awareness event she hosted earlier this summer have indicated both been a success.

“I get swarmed at the dermatologists office about how great the first dispenser is,” she said. “People can forget to pack their sunscreen or some people have never even used sunscreen before. It’s just not on their radar. So people are now trying it, it’s a great preventative for the residents.”

According to the Journal of Clinical Oncology regular sunscreen use can reduce the incidence of melanoma by 50 to 73 percent.

According the 2014 report “Surgeon General’s Call to Action to Prevent Skin Cancer,” skin cancer is the most commonly diagnosed cancer in the United States, and most cases are preventable. Melanoma is responsible for the most deaths of all skin cancers, killing almost 9,000 people each year. It is also one of the most common types of cancer among U.S. adolescents and young adults.

Berland is a skin cancer survivor herself and said this issue is very personal to her.

“People need to take care of themselves early in life,” she said. “This has opened up people’s eyes to the entire issue.”

The resolution will be presented to the board at the next town board meeting. Supervisor Frank Petrone (D) said in a phone interview he believes the program’s relatively low cost is an added benefit to the positives it will do for residents.

“It’s a very minimal price,” he said. “It’s not something to put my thumb down on.”