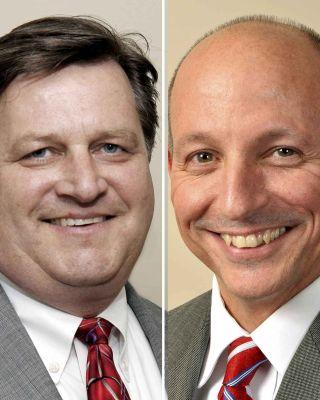 Former Brookhaven Town Board member Edward Hennessey has won an improbable political comeback in the 3rd Assembly District, turning a 36-vote election night deficit into a 226-vote victory over GOP incumbent Dean Murray, who was seeking his second full term.

Hennessey, a Republican-turned-Democrat who spent virtually no money and does not live in the newly redrawn district, managed the triple-digit win after election officials finished counting nearly 4,000 absentee and provisional ballots late Friday morning.

Murray, of East Patchogue, conceded earlier Friday in a call to elections officials. Hennessey had opened a 148-vote lead when the recount stopped at 8 p.m. Thursday, with 56 of the 72 election districts counted.

Murray thanked his supporters on Facebook about 8:50 a.m., calling it an "an honor and a privilege" to serve the residents of the 3rd Assembly District for three years. He added that "it wasn't in the cards for me to continue doing so."

"I'm very disappointed," Murray said late Friday. "I was looking forward to doing a lot more good for the district."

Murray said he is not ready to start thinking about future races. "Right now, all my concentration is on my upcoming wedding in three weeks and I'll make any decisions after that." Murray, 50, is marrying Amy Illardo, the daughter of Suffolk County Clerk Judith Pascale.

Hennesey, of East Moriches, in a statement, said he was "humbled" by his election and vowed to work "in a bipartisan fashion to find resources to help us rebuild after superstorm Sandy."

Hennessey's victory came after what he termed a "stealth campaign," fueled by the large presidential year turnout and the fact that he may have been better known in the district for his 12 years on the town board, compared with Murray's three as a state lawmaker. Hennessey, a lawyer, did not raise enough money to even file a campaign finance report. His only campaign literature was his resume, produced on his office copier.

The Assembly district also shifted eastward in the reapportionment, with 35 percent new territory, including Mastic, Shirley and Mastic Beach, areas where Hennessey is best known.

"In all my years in politics I have never seen anything like this," said Richard Schaffer, Suffolk Democratic chairman. "But when the district moved east, it put it into Ed's wheelhouse."

"I'm shocked and disappointed" said Jesse Garcia, Brookhaven Republican chairman. "It was a perfect storm that literally hampered Dean Murray," referring to superstorm Sandy. Garcia said the loss came after the lawmaker suspended his campaign in the last 10 days so he could help local residents prepare for Sandy and then recover from disaster.

"It was an anomaly that could only occur in a Hollywood script," added Garcia, noting that Murray is still a viable contender and will be considered in the upcoming special election for town highway superintendent. "I'd added Dean's name to any and all lists. We need a champion who represents average people as an elected official," he said.