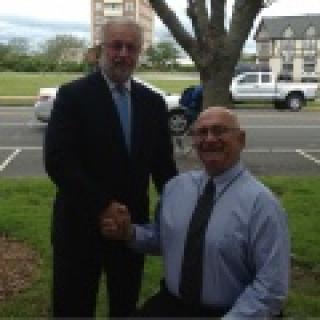 Former State Assemblyman John Behan, who was chairman of the East Hampton Republican Committee when Randy Altschuler first decided to run against Bishop in the 2010 race, said his decision to go against his party's endorsement before the 2012 election was about the candidates, not politics.

At the start of the announcement Behan said he wanted to address rumors that he had a vendetta against the local Republicans. "This is not a grudge against the Republican party, but I just wanted you to know that I do have some ill-wishes for them, when they just went against the wishes of the guy who they chose to be their Republican chairman for close to three years," he said.

He claims leaders of the party have tried to take credit for his ideas, such as getting East Hampton Town Supervisor Bill Wilkinson and town board members Theresa Quigley and Dominick Stanzione elected in 2009. He said his replacement, Trace Duryea, should have taken his suggestion during the last election.

"Had she taken Marilyn Behan and Bill Mott, as I suggested, they would have had a clean sweep the entire election," Behan said.

Marilyn, a long-time Democrat, is Behan's wife. In 2011, she only received the Independence Party nomination and ran with Mott, a former town trustee, losing the vote to Democrats Sylvia Overby and Peter Van Scoyoc. Republican candidates Richard Haeg and Steven Gaines also lost and Wilkinson was only re-elected by 15 votes.

Behan said his decision to reach across the aisle in what's shaping up to be the Bishop-Altschuler race has a lot to do with his change in opinion of Altschuler. George Demos, R-Ronkonkoma, withdrew his candidacy in late May.

"Two years ago, I was Republican chairman when Mr. Altschuler, who I now call the Great Houdini, appeared. After he lost that election, he disappeared and we haven’t seen or heard a word from him until this year, when he wanted to seek election," Behan said.

Bishop, Behan said, is no stranger. "I like a guy who is homegrown and knows the district like we all know the back of our hand," he said, adding that Bishop has worked hard for veterans. Behan is a Vietnam veteran who lost both of his legs in combat and who has worked on behalf of veterans' rights.