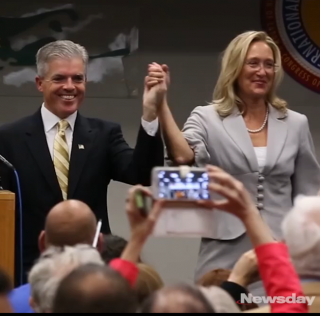 Bridget Fleming is headed to Hauppauge.

Ms. Fleming, a Democrat who serves on the Southampton Town Board, won a seat on the Suffolk County Legislature Tuesday night, receiving 59.92 percent of the vote to represent the South Fork.

Ms. Fleming, a resident of Noyac, will replace longtime Legislator Jay Schneiderman, who had reached the term limit. Meanwhile, he ran successfully for Southampton Town supervisor in this election.

Ms. Fleming's opponent, Amos Goodman, a Republican from Springs who is a financial consultant with a background in defense and security, received about 40 percent of the vote.

He has said that there was a "political class" in charge, which had "dropped the ball" on issues like budgeting and business development.

As Ms. Fleming takes her seat in January, she will serve as one of two legislators on the East End and join the 16 legislators representing western Suffolk County.