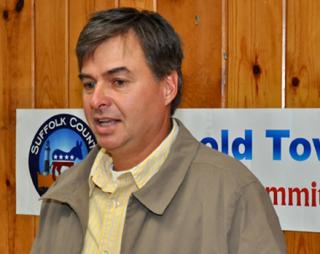 Incumbent county Legislator Al Krupski is running for his first full term on the county level after winning a special election earlier this year against Riverhead Supervisor Sean Walter. After earning two-thirds of the vote over Mr. Walter, someone who has proven himself on the town level, Mr. Krupski now faces someone who has less experience in public office in Republican candidate Albie DeKerillis.

Mr. Krupski is the clear choice to earn a full term in office this fall.

Mr. DeKerillis faces a steep uphill battle against Mr. Krupski, who has 28 years in public office under his belt. While seemingly hard-working and community-oriented — Mr. DeKerillis holds down two jobs while volunteering as an EMT — the Republican offers no clear plan to implement his number one priority, which he says would be bringing high-paying jobs to Suffolk County’s 1st District.

With budget woes a constant conversation at the county level, Mr. Krupski — endorsed by the Conservative Party as well as Democratic and Independence parties — brings a track record of fiscal right-mindedness that benefits residents in the 1st District and throughout Suffolk. Mr. Krupski went so far earlier this year as to reject spending $200,000 of borrowed money for a study that would have looked into the economic impacts the Peconic Bay Estuary offers, something he called a waste of taxpayer money. Given the Peconic Estuary Program’s library of reports, it’s clear those studies have already been done, and borrowing funds to study the issue again offers a questionable return on investment.

Mr. Krupski – a farmer himself – has focused most publicly on farmland preservation during his first 10 months in office, at one point earning the public scorn of some longtime environmentalists. But Mr. Krupski went back to the drawing board on his original plan to meet critics in the middle and further hone the plan. In addition, he has helped guide changes to the county farmland preservation code that were crafted with the support of those most in favor of saving what’s left. This flexibility is admirable, as is the effort to preserve the county’s remaining undeveloped land with a limited bankroll.

But one thing we do hope Mr. Krupski takes with him back to the Legislature, should he earn the votes, would be Mr. DeKerillis’ zeal to create high-paying jobs in the district, particularly at the Enterprise Park at Calverton.

Farm-related jobs are a vital part of the North Fork economy, but the future of the district’s western portion will rely heavily on whether or not businesses are drawn to EPCAL. Having a legislator in the majority who will promote positive change there should help hasten that process, and we hope Mr. Krupski continues to work with his peers and colleagues at the town and state levels toward that end. Mr. Krupski has shown during his time in office he can respond to his constituents’ needs and deliver for them.