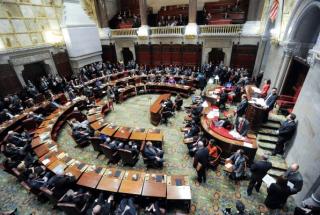 Brooks joined Sen. Todd Kaminsky (D-Long Beach) as the second Democrat to serve in the Long Island senate delegation, which for years has been controlled by Republicans.

Phillips, the former mayor of Flower Hill, celebrated the moment with family in Albany at a swearing-in ceremony and by posting an image on her Facebook page of the metal name plate bearing her name on her high-back leather seat in the Senate.

“Very grateful to have the incredible honor of representing our community in Albany,” she said.

“I will always fight to end corruption in government, will stand up for quality education for all students, and will work to make Long Island a more affordable place to raise a family,” Brooks said.