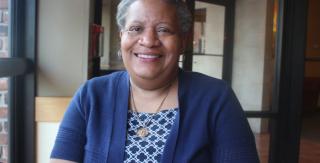 Edwards beat challenger and Centerport resident Darryl St. George (D), 3,482 votes to 1,664 votes, in the primary to become the Huntington Democratic Party candidate for town supervisor, based on the unofficial election results posted Sept. 13 by the Suffolk County Board of Elections.

Winning more than 60 percent of the overall vote, Edwards is already looking forward to the general election.

“I am ecstatic,” Edwards said. “You are always a little nervous, of course. But I was ecstatic to receive the confidence of the Democratic voters.”

The councilwoman said she had already reached out to St. George Wednesday morning to speak to him about working together in the runup to the November general election.

“I would like to call on Darryl and his supporters to join forces,” Edwards said. “We must work together to advance our Democratic and Progressive goals. Division will not lead us to victory.”

Edwards was elected to the town board in 2014, after serving 10 years on the board of education in the Elwood school district. She previously served on the board of directors of the Long Island Association and worked for 37 years at Verizon, starting as an operator and climbing the ladder to regional president of network operations.

“My priority No. 1 is the safety and protection of families,” Edwards said. “What we want to put together and what we want to share is our bold platform which focuses on safety by tackling the gang problem and eliminating the opioid and heroin epidemic in our town.”

Over the last three years, Edwards spearheaded the creation of Huntington Opportunity Resource Center, a program that offers assistance with job hunting and career training for unemployed and underemployed residents. She has also been an advocate for Huntington Station revitalization, a plan which includes construction of veterans housing, art space, stores, sidewalks and a parking garage, while also working to stamp out crime.

Edwards has more than $150,000 available in her war chest to spend in the lead up to the Nov. 7 election, according to the 11-day pre-primary financial disclosure report filed with New York State Board of Elections.

The Town of Huntington supervisor race is wide open as incumbent Supervisor Frank Petrone (D), 72, announced in April he would not be seeking re-election. He has served for nearly a quarter of a century, as he was first elected to the position in 1993.

Edwards is running on the Democratic, Independent, Working Families and Women’s Equality lines. She will face-off against Republican candidate, state Assemblyman Chad Lupinacci (R) and a Green Party candidate, pending the outcome of the Sept. 12 primary.